Update March 27 – the tweet was a mistake, and does not reflect AAI’s views on harassment. See comment 33.

And it links to the article at Atheist Revolution. There “vjack” explains what harassment is. Guess what!! It just so happens that it’s none of the things that the people I call harassers are doing to us! Is that a coincidence or what.

No, it’s not. It’s the whole point. Understanding Harassment=harassment is not what I’m doing to you.

vjack is worried about the word.

The word “harassment” is being thrown around quite a bit these days in the online atheist community. I find this troubling for two reasons. First, accusations of harassment are highly inflammatory and typically lead to an abrupt end to any discussion in which they occur, followed by increased polarization by the parties involved in the discussion. When the accusations were truly warranted, this may be unavoidable; however, unwarranted accusations seem to be surprisingly common and can do real harm. Second, harassment has legal implications in that it is defined as a criminal offense in most jurisdictions. Because of this, we should exercise caution about using the term to describe all behavior we do not like and reserve it for the occasions where it is clearly appropriate (i.e., real harassment).

Just as we should distinguish between real rape and the other kind, which is just a bit of fun with some drunk girl who shouldn’t have gone to that party in the first place because football.

According to USLegal.com, legal definitions of harassment vary from state to state but it “is generally defined as a course of conduct which annoys, threatens intimidates, alarms, or puts a person in fear of their safety.” They go on to explain:

Harassment is unwanted, unwelcomed and uninvited behavior that demeans, threatens or offends the victim and results in a hostile environment for the victim. Harassing behavior may include, but is not limited to, epithets, derogatory comments or slurs and lewd propositions, assault, impeding or blocking movement, offensive touching or any physical interference with normal work or movement, and visual insults, such as derogatory posters or cartoons.

Huh. There are quite a few items in that list that match exactly what I’ve been calling harassment: epithets, derogatory comments or slurs, and visual insults, such as derogatory posters or cartoons.

If we put these pieces together, we’d end up with an understanding of harassment as a pattern of repeated, behavior in which the harasser intentionally acts in such a manner that a reasonable person would find threatening, annoying, intimidating, alarming, or offensive. The behavior would need to have no other purpose besides impacting the target in this manner, and typically, the behavior would be intrusive in some way. If the target has to go out of his or her way to discover the behavior, odds are pretty good that it is not even close to harassment.

Ah what do you know – that link in “go out of his or her way” leads to a post by another nym, “unbelieve steve” this time, about…me. You can tell it’s about me because of the title. Ophelia Benson takes offense to parody accounts she scoured the interwebs to find.

Ok before I read that post, I’ll say – yes, I keep track to some extent of what kind of shit people are saying about me on the interwebs. It’s a meme among the harassers – yes, the harassers – that this is me doing “vanity searches.” Vanity! Hardly. And there are reasons for trying to keep track of shit people say about you in public. I don’t think I’ll even bother explaining that, because it seems pretty obvious.

[reads] Oh look, there it is already – “vanity search.”

A truly amazing feat. Ophelia Benson makes it her god given right and duty to conduct vanity searches for any mention of her name in any form of digital conversation.

She goes one step further and scours twitter feeds and monitors satirical accounts for the slightest WTF comments to be offended by.

Two satirical twitter accounts engage in a comedic conversation completely unrelated to any direct reference to the real Ophelia Benson.

I must say the back and forth by the two parody tweeters left me chuckling whilst enjoying my morning coffee.

Ophelia took offense to the content of the conversation and decided this is something that needs to be documented on her blog as some sort of proof of harassment.

“Two satirical twitter accounts engage in a comedic conversation completely unrelated to any direct reference to the real Ophelia Benson” except for the fact that both of them use my real name.

The fantasy world these people live in, where a person’s real name is completely unrelated to the real person.

Ophelia Benson is not a name exclusively owned by just one person. Census statistics show that in the United States alone, 17490 entries recorded for the use of “Ophelia” as a first name. “Benson” is not rare, showing 84233 instances recorded. Vital records show 31 entries for “Ophelia Benson” recorded in the United States. I feel ya O’Feel’ya, but a person is not identified by name alone. Impersonation is hardly the correct term to describe the parody accounts. One’s a pope and the other a parody Nazi nincompoop.

TIP: Stop doing vanity searches. Stick to blogging, and if at all possible, try keep it on topic of “free thought”. Just sayin’.

No harassment there! Nothing to see here folks, move along, keep the sidewalks clear.

So vjack draws on this scholarly and thoughtful source to explain that harassment you keep track of is not even close to harassment.

And then he moves on the the specifics.

Behavior That is Clearly NOT Harassment
Some of the behavior I have seen being labeled as harassment that does not appear to warrant the label, no matter how objectionable it may be, includes the following:

Item 7 is weirdly gratuitous, because the link is to Shermer’s eSkeptic piece that shouts at me. It’s gratuitous because no one ever called it harassment, that I know of.

Some of the items are true enough if that’s all there is to it – but if it isn’t, they’re not. Others are highly dubious even if you don’t know they’re part of a pattern and practice of extended non-stop harassment. Making images to mock people? That’s just self-evidently not harassment? Certainly not.

So the “dialogue” proceeds. 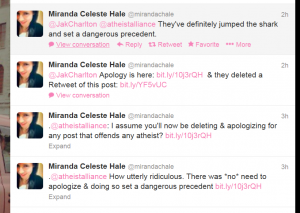 So what’s the other side like? Ask Surly Amy » « Dedicated dialogue