A winning argument made by Scented Nectar and Abbie Smith of ERV: 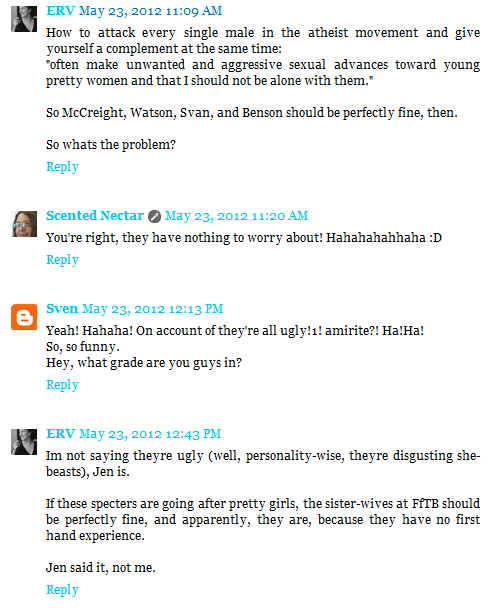 Proof women can be sexist assholes too! I really feel like we should have a law for this, like Godwin’s law. “As an online discussion grows longer, the probability of a woman’s appearance being mentioned grows larger.” The type of remark can vary. I’ve been called both pretty and ugly as insults (hurrrr, or pretty ugly!). Women just can’t win.

Sadly, I’m used to this. You know, because I went to high school. And middle school. And elementary school. I was a slightly chubby awkward nerd, which means spent age 5 through 18 constantly having my appearance made fun of. I think my favorite endearing nickname bestowed on me was Sasquatch, since I had the audacity to be a foot taller than other girls my age. Honestly I’m always more befuddled when people attack me by calling me pretty or sexy, since it’s a concept I’m still not totally used to. Anyway, glad to know some people never outgrow that stage.

And ERV is shocked that National Geographic wants her to pull down some inappropriate material? Calling someone ugly for a laugh is the most benign thing she’s done.