The comments in my previous post are getting a little mind numbing, so I thought I’d give you all something to make it more fun: 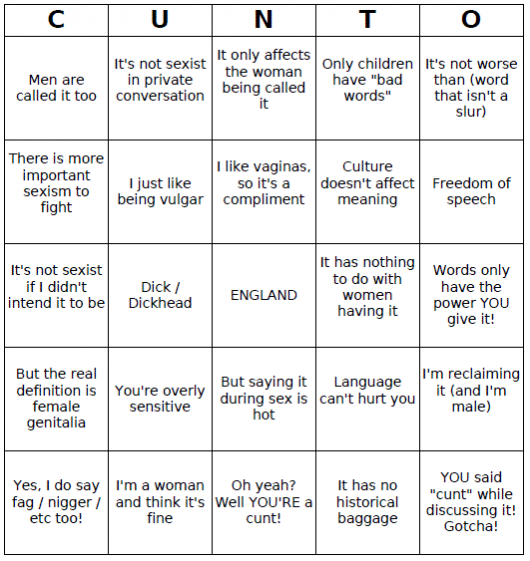 If you still don’t get why some of these squares are totally asinine, start reading the comments. I believe each has been thoroughly torn to pieces by now. I really have no interest in explaining basic concepts like “words have meaning.” I mean, is it even possible to explain that concept with words to a person who believes that? Do they consider phrases like “I don’t like you” and “I fucking hate your guts, shitface” to be equivalent and expect people to react equally unemotionally to either? Curious.

I do have to give a shout out to Penn Jillette’s wife, Emily, for helping me create half of the squares. She randomly started tweeting at me last night, apparently annoyed with my post about her husband. Amongst other gems (like her claiming to be a moral relativist because she follows Kant), was this exchange:

And then I stopped engaging with her, unable to take anymore examples of people who lack compassion and common decency. What a pair.

EDIT: Excellent idea from my friend Jesse – to make each square a link to an explanation as to why that statement is wrong. I don’t have the time to write up 25 summaries, but if people want to do it in the comments, I’ll be happy to link them up here.

EDIT 2: Matthew Smith briefly summarizes what’s wrong with every square here. Thanks, Matthew! His summaries more or less mirror what I was thinking.