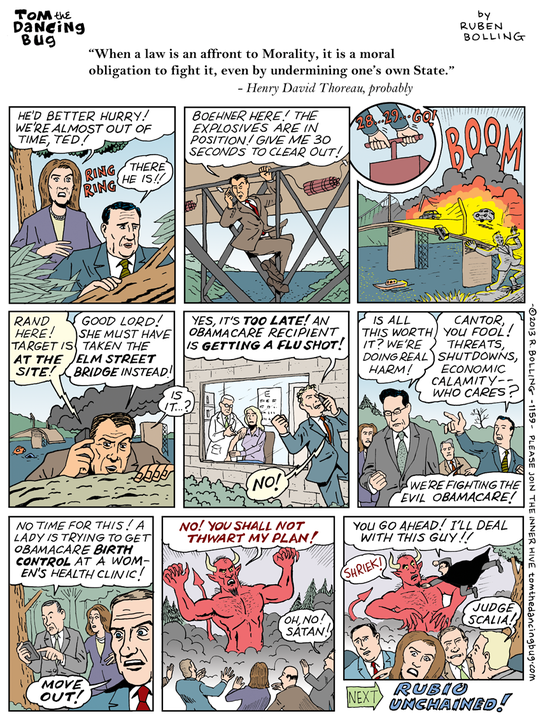 I know conservatives are bummed or pissed right now. Take it from us progressives, we’ve learned the hard way. You have to own all three branches of government to get anything major through. Even then it will be like herding kittens with a squirt gun. Good luck. 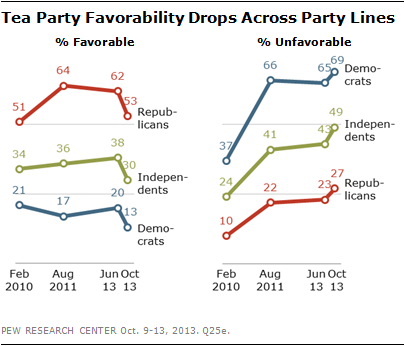 If you hear a nearby rumble, don’t be worried. It’s just your local Teaparty caving in on itself. Normally these bozos couldn’t care less about losing support among apathetic centrists. But a new poll holds devastating numbers for the extremist yokels: END_OF_DOCUMENT_TOKEN_TO_BE_REPLACED

By win, Cruz neglects to mention Teaparty added estimated $24 billion to nation’s deficit as result of shutdown
You’ve been feeling lousy, lately it’s turned into full blown exhaustion and a little dizziness. You start out trying an in network specialist, but soon come back around to your PCP as the network requires. Expensive out of pocket short cuts just aren’t an option on the $12/hour you make on the days you can handle a whole shift. A couple of exams and blood tests later, that PCP is really worried, calling you in and sitting you down for a close, grim face-to-face hand-holding discussion. You have all the classic signs of serious, often fatal conditions, we’re talking cancer of the marrow, liver/pancreas, or lymph system just for starters. The PCP is so worried she orders a suite of tests to begin immediately, including a CT scan. It’s so bad the doc actually has her MA call and schedule the most important tests while you are still in her office. You’re lucky in one small way, the radiology group the insurance company uses has an opening that same day, if you can hustle over there quick and have no other responsibilities that afternoon. Now, where in all that in-network drama might you suspect that that CT scan was not going to be authorized after the fact?

In America, in our corrupt healthcare system, on employer sponsored group health insurance considered better than average by most standards, that’s where. I just found out that scan has been denied, my PCP will fight it and probably win. After all, all they found was evidence for past chest injury or infection and a touch of pneumonia in the right lung … the real action turned out to be in the blood chemistry. But I don’t know if we’ll win or not, either way it just goes to show fucked up this system is and how badly it needs to be changed. 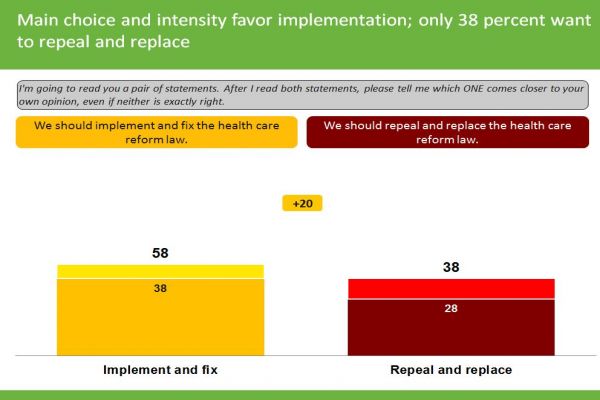 The Teaparty was right to be afraid. Now they should be very afraid. Obamare is no longer “unpopular” and by some polls is indeed supported by a majority of Americans. Case in point: END_OF_DOCUMENT_TOKEN_TO_BE_REPLACED

Let the historical revisionism begin. Take it away Teatards!

Imagine someone ostensibly in a position of knowledge said something utterly incomprehensible. Say for example someone on the board of the American Medical Association quipped that decapitation not only isn’t fatal, it can actually be good for the patient. Nowadays we’d attribute that to some clown seeking page views and Youtube hits. But those kind of crackpots have been with us since the beginning of time. They found a loving home in the modern GOP, most notably in the lucrative fields of anti-science histrionics, which is now bleeding over into pseudo-economics. Thankfully, we may have a reprieve: END_OF_DOCUMENT_TOKEN_TO_BE_REPLACED

It seems the Senate came up with a plan of sorts to save the nation from economic Armageddon. Naturally, a few dozen members of the House of Teaparty wax dummies had to be placated less their fee-fees be hurt and it fell apart. Which leaves one day to get it together and maybe one weekend before things really start approaching irreversible. The scariest thing is, the same denial that’s been nurtured and developed for everything from evolution to climate science is not being being brought to bear on this issue and against Republicans who do not show proper fealty for the crazy caucus: END_OF_DOCUMENT_TOKEN_TO_BE_REPLACED

END_OF_DOCUMENT_TOKEN_TO_BE_REPLACED

Who could have predicted that shutting down the country would be an unpopular move? Well, pretty much everyone, including Teaparty Republicans who publicly maintain it was a gallant and possibly brilliant move, otherwise they would not have spent so much time trying to saddle their critics with the blame. A new poll shows that that strategy isn’t working out very well: END_OF_DOCUMENT_TOKEN_TO_BE_REPLACED 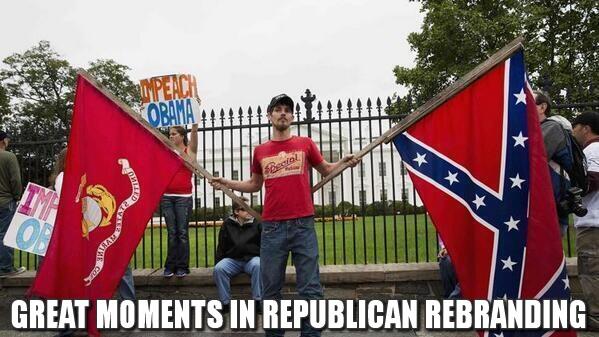 From LGF on a post about the vets Cruz and Palin tried to turn into props. Even the vet groups are dissociating themselves from those grifters.

I’m not crazy abut McCain, but I don’t hold the man in contempt like I do his Teaparty cohorts. His former campaign manager, Steve Irwin Schmidt who you often see on MSNBC, is about the best GOP contributor on any cable news outlet in my opinion. It’s good to have a sane Senator like McCain and it’s great to hear from an honest GOP strategist like Schmidt. That being said, what reason is there to be magnanimous to people who ran on disinformation and racist hatred, who campaigned on shutting down the government, then shut down the government and found it was terribly unpopular, and who are now doing their level best to blame the shutdown on Democrats while calling us traitors and terrorists along the way?