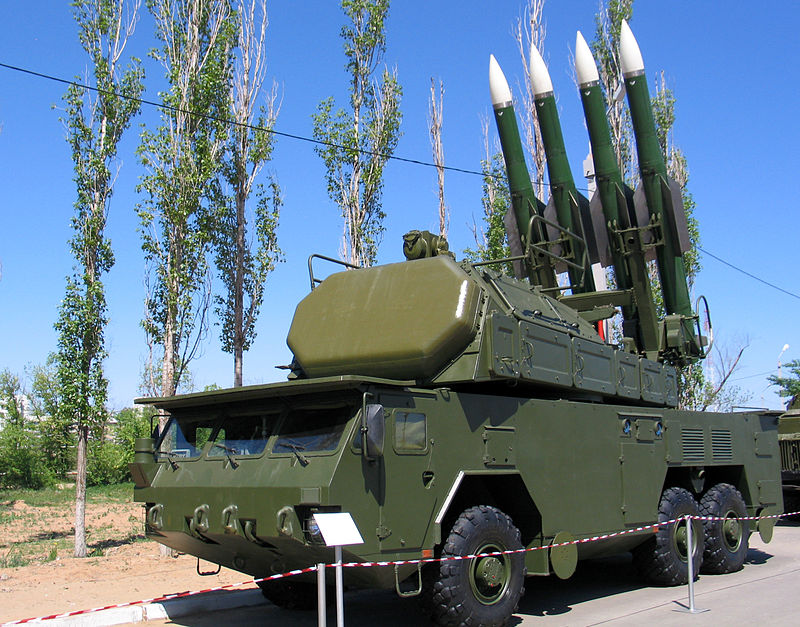 There is a great deal of speculation about the fate of an airliner carrying almost 300 people reportedly shot down over the Ukraine. But Europe’s aviation admin has closed Ukrainian airspace and consensus is tentatively converging on a Russian built Buk anti-aircraft missile. These radar guided missiles pack about 150 lbs. of high explosive, cruise to their target at over 2500 mph, and can reach as high as 70,000 feet or more. A big airliner at 32,000 feet wouldn’t have much of a chance against that. The Buk is a sophisticated system and there is strong suspicion or at least accusations flying that only pro-Russian separatists or Russian soldiers would posses working versions and the training to operate them.

Wikipedia — A standard Buk battalion consists of a command vehicle, target acquisition radar (TAR) vehicle, six transporter erector launcher and radar (TELAR) vehicles and three transporter erector launcher (TEL) vehicles. A Buk missile battery consists of two TELAR and one TEL vehicle. The battery requires no more than 5 minutes to set up before it is ready for engagement and can be ready for transit again in 5 minutes. The reaction time of the battery from target tracking to missile launch is around 22 seconds.

Much of the wreckage is strewn over a region several miles wide near a separatist stronghold. There are reports of separatists denying any involvement and rumors of offers for a short-term truce, giving first responders time to examine and manage the impact sites.

Shortly after Vice President Biden’s remarks, Fox and NBC reported that U.S. military officials confirmed they believe the plane was shot down by a surface to air missile in Ukrainian airspace near the Russian border, but they did not say they had determined where the attack had been launched.