Such was the case in an exotic, untamed land far to the west of power and wealth, an almost mythological place full of treasure and peril, with flashy, savage names. Countries within a country, the Utah, New Mexico, and Nevada territories. Lands once free, until jackbooted thugs wearing the insignia of collectivist war lords rode into town and stole the chosen people blind. The problem is, like most bedtime stories, it’s pure fairy dust. But there sure is some stealing going on …

Back in the mid 19th century there were indeed vast, sprawling territories of high desert and arid mountains dotted with barely arable plains and occasional scrubby farmland being added to 30 odd United States, a nation growing like tomatoes on black-market plant-food. The Nevada Territory at the time was the living breathing incarnation of Hell overlapping the farside of the Rocky Mountains, the wildest of the Wild West. Liberty loving rattle-snakes and the most patriotic of scorpions ran free over endless square miles of dry land, land often times with no clear owner. This was classic west, sheep and cattle ranchers vying for control, ranchers and farmers forming fragile alliances to hold off Indians and rustlers, Gentiles and Mormons lived side-by-side or across the divide, as railroad tracks and telegraph lines inched through and slowly began to conquer the desolate wilderness under the banner of manifest destiny.

It was somewhere in that process, well over a hundred years ago, that it occurred to a few less-than-scrupulous people how awesome it would be if the newly created State dealt with all the routine headaches of land ownership, but still left the resources open and available for agriculture and industry to exploit at will. Why buy huge, expensive tracts of open wilderness, why spend your own precious dollars and worry about toxic clean ups or burnt out soil, if you can get it surveyed for valuables, graze it and log it and mine it and build homes on it and get water wells put in, etc., for free?

Location location location! A few shady politicians, some greedy loggers and mining companies, a few farmers and ranchers, all operating in distant, hard to access places few Americans cared about, places few had even heard of much less seen, all added up to an unsual version of the American Dream: the Great Western Gravy Train. And that train ran non-stop, ferrying money and resources from East and West coast taxpayers straight into the pockets of once impoverished residents for decades. Some were more honest than others, but throughout the Roaring Twenties and the Great Depression all were aided in one way or another by a den of legal thieves stretching from DC to Divine Strake. Then it got even better!

The end of World War II brought greater opportunity for the ambitious western moocher. The now powerful federal government needed safe places to develop and test their new super weapons, build and fly secret aircraft, shoot rockets and blow up stuff, they needed to conduct it all, noisy and messy, far away from prying eyes. So the cabal of congressmen and cowboy CEOs ‘reckoned,’ why not create or extend huge, convoluted bureaucracies to further acquire land and expand the Great Gravy Train?

And so it was done. And generations of people grew prosperous, entire families were raised thinking of the land as theirs. Except when pesky bills for out of state geologists or construction crews or clean up projects, to tap deep aquifers and build expensive roads to nowhere, came due. At which point those would be sent right to Uncle Sam, leaving the real estate just where the rancher and miners and loggers needed it. And most were satisfied with the arrangement, who wouldn’t be? It was money for nothing and land for free.

Except for a few kooks and cranks who got grabby and greedy. Enter Cliven Bundy. Who has added to his repoitiore by declaring himself a Mormon prophet with divine revelation to share:

The message I gave to you all was a revelation that I received. And yet not one of you can seem to even quote it.” … He goes on to explain that, although they managed to deter the BLM, they failed to do it “within one hour,” as the revelation had prophesied. So when an hour passes, he decides to get in his bulldozer and march on the BLM himself. The dozer gets stuck in the mud and he receives another revelation. “It come to my mind real plain — the good Lord said, ‘Bundy, it’s not your job, it’s THEIR job.’

OK, so you’re all in trouble with God for not charging armed agents while Bundy’s precious holy ass stays safely the behind the lines … Normally this might be attributed to cynical self enrichment. But given the circumstances there’s also a real possibility Bundy is suffering from dementia or some other serious issue.

Back in the real world, the Bundy’s were one of many post-war ranching and farming families who got lucky as the free land and free money scheme grew. By the 1980s they were worth serious dough, not bad for growing melons and ranching cattle in the middle of nowhere. They could have grazed their growing herd on private land for 20 bucks a head, or they could have taken advantage of any of the nearly endless perks of the Gravy Train: buy land at special rates using special loan programs set up just for people like them.

Being able to add and subtract, the Bundy family took full advantage of the bargain rate of a buck twenty-five a head courtesy of John Q Taxpayer and the Great Gravy Train. It had been a $1.12, but over sixty years the jackbooted thuggish government, known in other quarters as We the People, had raised the price a full twelve-cents. Most ranchers knew a kick-ass deal when they saw it.

But for patriarch Cliven of House Bundy, that was just too goddamn much! Beside, Bundy insisted, since his grandpappy and other local ranchers had been living in the region for decades … somehow that meant it was really all his land. And he shouldn’t have to pay anything. So he mooched for twenty years, ignoring bills and collection notices and court orders. This is one reason why Bundy whining about government control and subsidies is so deliciously clueless. Which brings us up neatly to recent events, where Bundy quickly used up his fifteen minutes of fame and it all blew up.

That’s the short, simplified version of Nevada ranchland and the Ballad of Bundy. There are not many other group of people have benefitted so much, so consistently, and for so long from government programs as western farmers and ranchers. They continue to enjoy the rich legacy of long dead, crooked politicians and forgotten local business folks who took advantage of post-war growth, starting with the War of Northern Aggression right through the Cold War. Bundy inherited virtually every comfort and perk government can offer, thanks to men who manipulated the government into dealing with all the expenses of owning land, while they, local residents, enjoyed all the privileges. On our tab. Or at least that’s how it used to be, it may not last, thanks to clowns like Cliven Bundy. 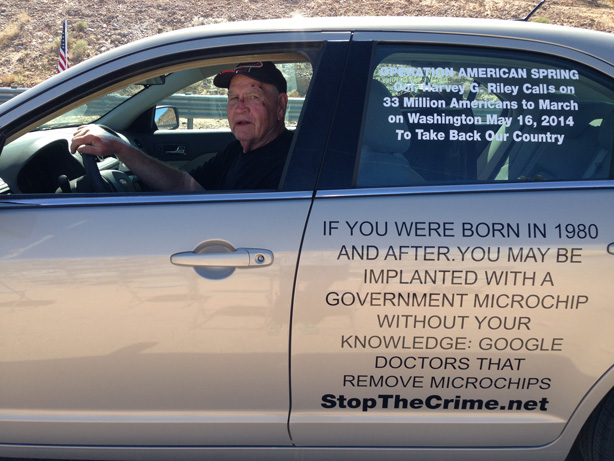 My understanding is local ranchers are not real happy with the Bundy’s for putting that sweet Gravy Train in the national spotlight, drawing in X-file aficionados and gun toting conspiracy nuts setting up checkpoints and sniper perches, and risking the entire cushy set up they have prospered from, starting lo these many, many years ago. He may be in danger alright. If the gravy train is even slightly derailed, Cliven Bundy might have to start worring less about country sheriffs and more about local, vigilante justice.

Every move you make, I’ll be watching you » « Calentamiento de la Tierra