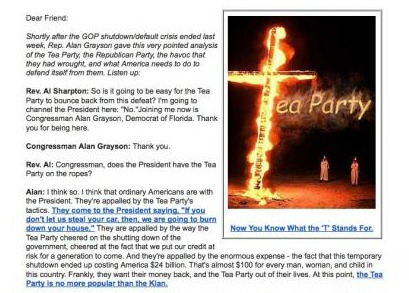 This flaming cross and text distributed in an email by Florida Rep Alan Grayson has the entire Teaparty and a few centrist dems all up in arms. Because, as we all know, there is no racist element in the Teaparty and there never has been. So ignore your lying eyes:

MoJo — Chris McDaniel is taking the “GOP Civil War” to a new level. Two months ago, the tea party-backed Mississippi Senate candidate addressed a neo-Confederate conference and costume ball hosted by a group that promotes the work of present-day secessionists and contends the wrong side won the “war of southern independence.” Other speakers at the event included a historian who believes Lincoln was a Marxist and Ryan Walters, a PhD candidate who worked on McDaniel’s first political campaign and wrote recently that the “controversy” over President Barack Obama’s birth certificate “hasn’t really been solved.”

.. Attendees were advised to dress in “Confederate uniforms and antebellum ball gowns or wee kilties.” McDaniel’s appearance at the Rosin Heels heritage conference was not a one-off occurrence; weeks earlier he was the keynote speaker at a separate event in Jackson. The Rosin Heels does more than regret the outcome of the Civil War. Its monthly newsletter routinely features articles and essays advocating for present-day secession.

It’s not like the usual suspects compare any policy they don’t like to slavery, with the proponents of said policy playing the part of slave owners of course. Or declare it the mutant love child of Adolf HItler and Yosef Stalin on a regular basis.

So yeah, you can see their point, they’re playing fair! And so it’s terribly unfair, just mean really, to remind people imply that a critical chunk of the modern day GOP includes an even more sizable chunk of teatards who has their heart away … away … away down south in Dixie. Mr Grayson should apologize, and we should all rush to condemn him for his hard-hitting analogy, immediately. In fact, shouldn’t we demand Barack Obama apologize for it too? /sarc