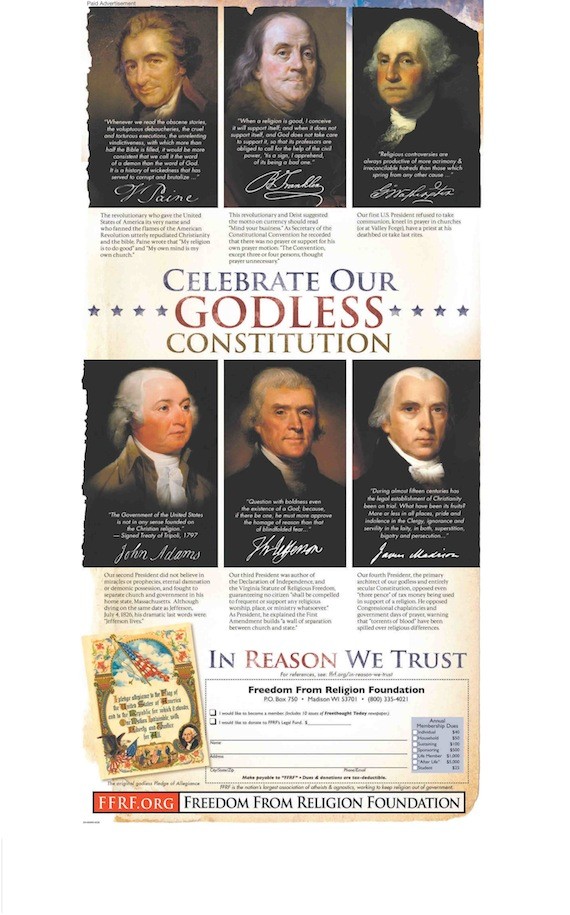 An atheist org has bought hundreds of thousands of dollars worth of ads in papers across the nation celebrating the secular nature of the US Constitution. The ads, sponsored by the Freedom From Religion Foundation (FFRF), pointed out our founding document is free of references to a deity despite what many political leaders like to say:

HuffPo — Elsewhere in the country, some of FFRF’s nearly 20,000 members fought back against a recent newspaper ad campaign by Hobby Lobby that sought to promote God’s role in the nation’s founding.

While Hobby Lobby ad, first published around July 4, put the phrase “In God we Trust” front and center, the Albuquerque FFRF chapter countered with, “In Reason we Trust.”

“Freethinkers can all celebrate the fact that the founders of our nation were first among nations to adopt a godless and entirely secular Constitution, whose only references to religion are exclusionary,” FFRF co-president Annie Laurie Gaylor said of the ad, purchased in the Albuquerque Journal. “It’s not a coincidence that the U.S. Constitution is the longest-lived constitution in the world. Much of the success of this ‘living document’ is due to the fact that it places sovereignty not in a divinity, but in ‘We the People.'”