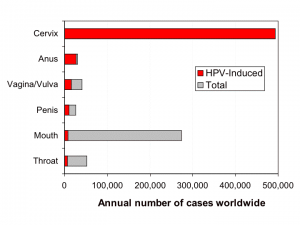 You know that vaccine for human papillomavirus that conservatives fought tooth and nail against and continue to do so? The one Rick Perry waffled on and that Michelle Bachmann claimed caused retardation in last year’s GOP clown show? Surprise, surprise, it’s working:

Rates of HPV strains related to genital warts and some cancers have decreased 56 percent among American teen girls since a vaccine was introduced in 2006, the Centers for Disease Control and Prevention reported Wednesday.

The government health agency’s new study, which was published in the June issue of The Journal of Infectious Diseases, shows that rates of vaccine-type HPV prevalence dropped from 11.5 percent before the vaccine was introduced to 5 percent by 2010 for 14 to 19 year-old-girls.

“These are striking results,” CDC director Dr. Tom Frieden said on a conference call Wednesday. “I think they should be a wake-up call that we need to increase vaccination rates because we can protect the next generation of adolescents and girls against the cancer that is caused by HPV.”

A quick look at that image above should tell any self-absorbed good ole boy who thinks this doesn’t affect him, and doesn’t care about any women in his life, we all have some rather precious skin in this game.