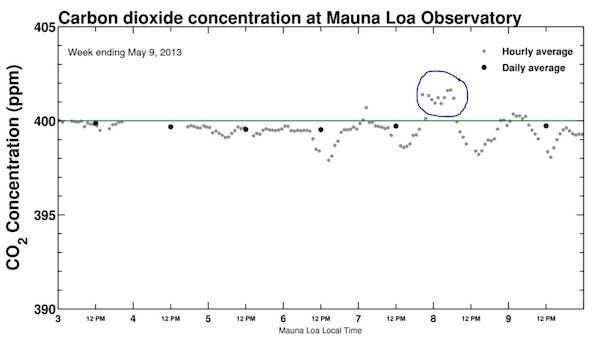 The difference between 399 parts per million of carbon dioxide and 400 ppm isn’t much, but new data from NOAA shows that that thresh-hold has now been crossed. The last time earth saw levels this high it was a very different place:

Real Climate — This period of Arctic warmth “coincides, in part with a long interval of 1.2 million years when the West Antarctic Ice sheet did not exist.” Indeed, sea levels during the mid-Pliocine were about 25 m [82 feet] higher than today!

Paleo-climate Professor Michael Mann, author of The Hockey Stick (And now a DKos diarist), emailed noting that, “The last time we’re confident CO2 levels breached 400ppm, was the mid Miocene, around 10 million years ago, though it could have been a bit later, e.g. 4 million years. In either case, we know that the globe was quite a bit warmer than today, with much less ice around, and much higher sea level.” When I asked, Mann added he could think of no significant factor present millions of years and not present now that might dampen warming.

The new data and recent work solidly linking past CO2 levels to much warmer temperatures, lends further credence to the views expressed by climate scientists like NASA’s James Hansen. That even maintaining CO2 at current levels, let alone raising them further through ongoing carbon emissions, could lead to dangerous, irreversible changes in the climate.

A delightful Oddity from Space » « Bin Laden determined to strike in the US!