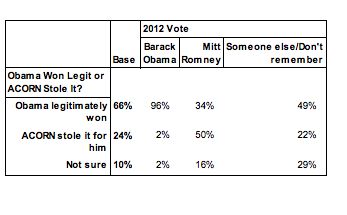 Have you heard of a debt plan called Panetta/Burns, similar to Bowles-Simpson? No? Good, because there is no such plan. Did you know ACORN stole the election for Obama? Nope? Also wise, see below. How about secession, the last refuge of a fake patriot or a real traitor? This new PPP poll (.pdf) has all that and more. Some highlights:

Atlantic Wire — The funniest poll of the afternoon comes from the folks over at Public Policy Polling, who have results that are new and legitimate results (if a bit heavy on the forced fantasy questions) finding that 49 percent of Republicans and six percent of Democrats believe ACORN stole the 2012 election for Barack Obama — despite the pesky fact that ACORN folded in 2010. How … wait … huh?