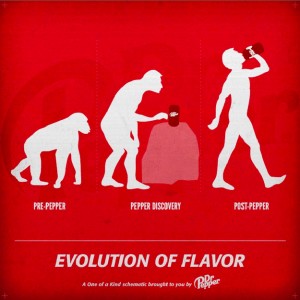 Hell hath no fury like anti-science numbskulls. Dr Pepper had the audacity to put up an image riffing on the famous ape to man chart that adorned our biology classrooms back in the 60s and 70s, and they were quickly swarmed by know-nothing-bots. But then our side, the good guys, counter attacked! Now the battle rages on! Serve your cause, join the Facebook fray, selected comments and links below:

Link — Then why have the old laws? To show what not to do? To show that god was a cranky old man who goes through bipolar extremes? Maybe the creation story was changed as well? Anyways, stop getting pissed off. To quote some friends “The day a Dr. Pepper ad makes you mad is the day you might want to rethink the whole reason you are mad” (paraphrased Smartass Atheist Guild)

Young Earth Creationist reasoning: “I am a despicable, filthy sinner who deserves to burn in hell for eternity, and I have no power to fix this situation because I’m so depraved and fallen, due to a sin committed thousands of years before my birth by the first man, who was made from dirt. But don’t you dare insult me by saying my ancestors were apes!”