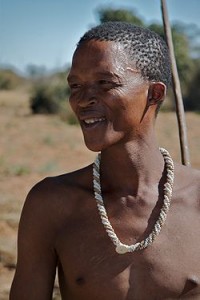 There is a debate in paleoanthropology, well, there are lots of them. But this one has to do with behavior that doesn’t fossilize well, and which suggest the presence or lack of modern cognition. The ancestors of the San, pictured above, are a great source of data for that question. A new find pushes back the date when San Bushmen behaved like any other modern people right down to symbology and sophisticated subsistence strategies:

WaPo— Poisoned-tipped arrows and jewelry made of ostrich egg beads found in South Africa show modern culture may have emerged about 30,000 years earlier in the area than previously thought, according to two articles published on Monday.

The findings published in the journal “Proceedings of the National Academy of Sciences” show that the 44,000-year-old artifacts are characteristic of the San hunter-gatherers. The descendants of San people live today in southern Africa, so the items can clearly be traced forward to modern culture, unlike other archaeological finds, researchers said.

Anatomically modern humans appear in the fossil record in Africa about 150,000 to 200,000 years ago. But the first inkling of so-called modern behavior this find represents seems to spring almost out of nowhere about 50,000 to 75,000 years ago. The date is imprecise in part because the evidence is sparse and in part because it’s a bit arbitrary — what really counts as modern behavior?

There is some evidence that our direct ancestors were a relatively small group, one kind of human among many, that underwent a trial by fire. In fact we do know a relatively average super volcano erupted in Sumatra about 72,000 years ago and may have caused a disruption in climate and associated ecology that affected that population, our population. Some anthropologists and geneticist think our numbers may have shrunk to as few as a few thousand adults scattered over thousands of square miles in a single part of Africa.

Whatever the cause, and bearing in mind our proclivity to laud our own specific greatness over rivals, there does seem to be a jump in human behavior circa 50 – 70 KYA as demonstrated by the emergence of art, technology, and diversity shortly after the Sumatran eruption. Modern people lived for tens of thosands of years in Africa. Then, in the space of a few thousand years, Hsap culture bloomed, we flowed over the panet like a human tsunami. People walked out of Africa into the Middle East, some turned north and west into Europe, others stayed east, shot across the coasts of southern Asia developing better technology the entire way until they could sail across the Pacific to colonize the virgin lands of Australia; they were so good at navigating and boat buiding that they eventually reached Hawaii, Easter Island, and may have even set foot on the west coast of South America. Other groups took on Siberia — in a brutal Ice Age mind you — and would one day walk over the top of the frozen world into North America.

By the time the two great branches of the human family, east and west, reunited in the European Age of Exploration, those hunter-gatherer pioneers had successfully expanded down through the Great Plains and Central America, tamed the mighty Amazon basin, and were living comfortably clear down to the tip of Argentina and as far east into both new world continents as they could go. And, for the first time in millions of years, there was only one kind of human alive in all the world. Our archaic hominid peers, as rich in subspecies a mere 100,000 years ago as anytime in hominid natural history, had all disappeared completely.

Trying to understand what it was that allowed our ancestors to flourish so dramatically while others living side by side went into the sweet night of extinction is a big deal in anthropology. There have been many ideas, resistance to disease, a common language stemming from that limited geographical beginning, insular culture with a powerful touch of xenophobia. But whatever it was, it’s hard to look at the evidence and not conclude our anatomically modern human ancestors simply had something going for them intellectually that our close cousins at the time lacked.