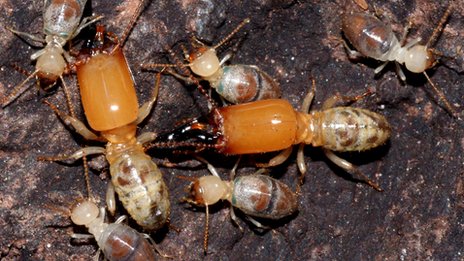 If you think humans are the only ones dumb enough to pack explosives around themselves in the hope of blowing up enemies, think again. Termites do it, and they utilize the suicide bomb to disperse Weapons of Mass Destruction!

BBC— Although termite societies contain castes of “soldier” individuals with vastly enlarged mandibles that have evolved for the purpose of attacking intruders, workers can join fights and perform defensive suicides should the need arise.

The research shows that as workers in this species grow older and more incapable of performing other tasks, they store up crystals that produce a chemical reaction when mixed with glandular secretions. This increases the toxicity of their explosive defence mechanism.

As yet no word on the motive. If it turns out the termites do this in the name of the All Loving Magical Invisible Queen and hope to move on to an afterlife in a Great Hive floating in the clouds — or on another planet for Termites of Latter Day Fakes — where they’ll each be waited on hand and foot by 72 drones, we’ll know we’re not the only really, really stupid species of suicide bombers on the planet.