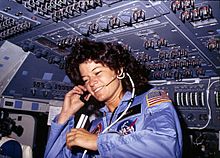 Dr. Sally Ride, the first American woman in space, has passed away after a long fight with pancreatic cancer. She was only 61 years-old.

Ondeadline— Sally was a physicist, the first American woman to fly in space, a science writer, and the President and CEO of Sally Ride Science. She had the rare ability to understand the essence of things and to inspire those around her to join her pursuits.

Sally’s historic flight into space captured the nation’s imagination and made her a household name. She became a symbol of the ability of women to break barriers and a hero to generations of adventurous young girls. After retiring from NASA, Sally used her high profile to champion a cause she believed in passionately—inspiring young people, especially girls, to stick with their interest in science, to become scientifically literate, and to consider pursuing careers in science and engineering.

A few years ago I had the opportunuty to speak with Dr Ride. For someone who soared above the clouds she was incredibly down to earth, super enthusiastic about science ed, and just really, really cool.