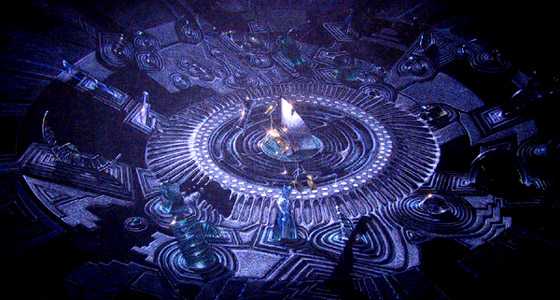 Voyager after being captured by a machine intelligence and greatly enhanced in Star Trek: The Motion Picture.

After an epic journey by any standard, Voyager 1 is leaving the solar system, forever. And we stand, collectively, on the cusp of being just barely an interstellar species:

TPM — It’s hard to overstate the milestone: At some point in the near future — it could be days or months, possibly, but not likely even a few years — Voyager is expected to break away from the bubble of particles emitted by the Sun encasing our solar system and enter the totally new, completely unexplored region of interstellar space, the black void separating us from the other star systems in our Milky Way Galaxy.

Just in case, the plucky little spacecraft carries a plaque and a golden record telling some of our terrestrial story. It includes over 100 beautiful images and related sounds, like surf, wind, and thunder, the songs of birds and whales, musical selections from different cultures and eras, and greetings in 59 human languages.

Martian snow not as alien as you might think » « Who are Thunderf00t and Aaron-Ra?