Reports have appeared that the US ran a cyber war program infecting the networks that manage Iranian centrifuges with computer viruses intended to slow down the production of weapons grade fissile material by the pariah nation:

(New Scientist) — This revelation is at the heart of an apparently impeccably-sourced book due to be published in the US on 12 June. In Confront and Conceal: Obama’s Secret Wars and Surprising Use of American Power, author David Sanger alleges that Stuxnet, which eventually wrecked hundreds of uranium centrifuges in Iran in 2010, was created by cyberweapons experts at the US National Security Agency in collaboration with ‘Unit 8200’, a cyber operation of Israeli intelligence. 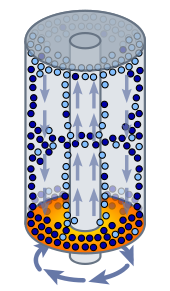 Centrifuges are devices that separate and purify the type of fissile material needed to produce a critical reaction, i.e., the heart of an atomic bomb. It’s called enrichment. Enrichment is necessary because the material, usually Uranium and Plutonium, come in different isotopes, atoms with the same number of protons but different numbers of neutrons, and some isotopes are better for weapons or reactors than others . The differential in weight between the isotopes is tiny, so one way they’re separated is by putting the raw stuff in the form of a gas/fluid compound in big cylinders standing on their ends like missiles and spinning the cylinder hundreds of times a minute for weeks.

The exact percentages of fissile material needed for military reactors or weapons is generally classified (And trust me, on the weapons side of it, what you see quoted on the Internet or what your uncle read in a book may or may not be anywhere near accurate). But conventional wisdom is low single digits, around 3 – 5%, are used in civilian land-based nuclear reactors, low double digits serve as reactor material in nuclear subs, and very high purities in excess of 90% are needed to produce a critical runaway atomic reaction like the one that devastated Hiroshima. It takes a number of those fission reactions all going off with perfect timing arranged in a precise geometry to squeeze and heat the very light elements in the core of an H-bomb. In short, to have a nuclear weapons program, you need a lot of weapons grade highly enriched fissile material. It’s a damn good thing for our planet that making a few kilos of this stuff takes a huge amount of time and work.

In the 1950s and 1960s the US developed really big centrifuges that could turn out large amounts of weapons grade material. That technology worked well, but the tolerances are unforgiving; it takes extreme manufacturing precision and constant attention to components to keep production rolling. Just the over-sized ball-bearings alone were a constant pain in the ass for the good ole boys at Oakridge. Other researchers developed another method, a simpler, more scalable approach using much smaller centrifuges. Instead of dozens of very large ones, they had a whole series of them, hundreds in a row. Centrifuge A would produce a particular purity and that material would be piped to fuge B and so on. You don’t get as much refined material as quickly, but the smaller machines are easier to build and maintain, if one has to be serviced it can be valved off and the material just goes to the next one in the series, and the host nation might even remove the fuges at the end of the series for inspection and crow about how it’s all  3% stuff for peaceful civilian power stations. Many analysts speculate the Iranians use this method and that makes complete sense.

Managing hundreds of centrifuges whirling like racing engines full of radiactive gas in a series is not easy, it’s dangerous for the techs and engineers involved. The one big difference these days from the 1960s is the use of computers to monitor and optimize things like heat of friction, spin rate and signs of a wobble, radiation leakage, purity at all steps and so forth. Aha! If that network could be infected, it might send off a detailed stealthy streaming report on the day to day production results for us red-blooded ‘murikans to examine. If sensor data could be changed or read differently than it was supposed to be read, it could ruin entire production runs and maybe even cause expensive machinery to break down completely. At least that’s the gist of what I’m reading about it today. In an extreme situation it might even be possible for the infected network to produce material that was read as weapons grade, but is not weapons grade and therefore cannot achieve criticality — the a-bombs would fizzle not flash — but I haven’t seen any credible reports that this cyber attack was geared in that direction.

Opinions may differ, but in my view if the purported operation worked or even had a decent chance to work, and this isn’t just the usual spoofing or PR spin, more power to our men in radioactive black. That’s what we pay ’em to do and it beats the hell out of carpet bombing suspected facilities in just about every way imaginable — unless of course you are a draft dodging neocon advisor to Mitt Romney or a proud member of the 101st Keyboard Kommandos chomping at the bit for another trillion-dollar bloody boondoggle in the Middle East.