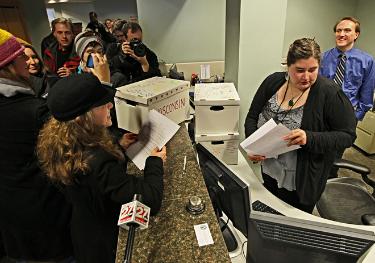 From a just released bulletin — that I had to sit on for a couple of hours and wasn’t allowed to tell anyone about publicly. The recall Governor of Wisconsin, i.e., Scott Walker, seems to have scored big. About 46% of the entire Wisconsin electorate signed the recall petition, that’s huge. And where is Walker as this unfolds? He’s at an NYC fundraiser far away from his home state, begging the guy who founded the firm that crashed the economy for money so he can keep handing out gravy-laden middle-class tax-payer goodies to the pampered 0.01% who preyed on the rest of us for the last 30 years. Some stats from the recall release below the fold: