It may not have made the world news, but a Martian tried to sneak in under our radar cover last summer and set up residence in the desert of Northwest Africa not far from Morocco. But of course it was nothing biological, no LGM’s or off-world octopi, dammit! This was merely an inert piece of Mars. Chipped off the surface of the Red Planet eons ago, and newly fallen to earth after a no doubt long journey through the inner solar system. Needless to say, rocks form mars hitting earth are rare, and rarer still that we actually see one streak in. 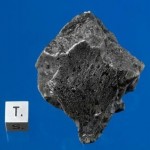 (Boston.com) — Astronomers think millions of years ago something big smashed into Mars and sent rocks hurtling through the solar system. After a long journey through space, one of those rocks plunged through Earth’s atmosphere, splitting into smaller pieces. Most other Martian meteorite samples sat around on Earth for millions of years — or at the very least decades — before they were discovered, which makes them tainted with Earth materials and life. These new rocks, while still probably contaminated because they have been on Earth for months, are purer. The last time a Martian meteorite fell and was found fresh was in 1962. All the known Martian rocks on Earth add up to less than 240 pounds.

Sounds like dealers were Johnny-on-the-spot, getting ahold of the material and offering rocks at prices of thousands of dollars a gram. Lucrative work, if you happen to be within driving distance of a meteor hit on unclaimed wildnerness property.