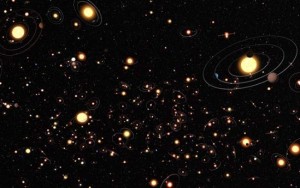 Even in the most modern, mass produced storage media, it normally takes near a million atoms to store one bit of information. Big Blue hopes to reduce that a tad:

Now, researchers at IBM have teamed up with collaborators in Germany and Switzerland to store information using a related phenomenon, antiferromagnetism. And they’ve shown that it’s possible to store a bit in a feature that contains as few as six iron atoms. The downside is that the storage was only stable at extremely low temperatures. If the sample was allowed to heat up to 5K, the information on the bits vanished.

Five degrees Kelvin isn’t easy to reach, it’s really cold, only about two degrees warmer than intergalactic space. But technology has a way of moving on, and besides, we may not always be stranded here on earth. Space is vast. There’s a lot of room, for a lot of hard drive.

Boo-hoo! The religious right has a big problem » « Now Showing: Mittens of Romney vs. Newton of Gingrich in The Bainwreck