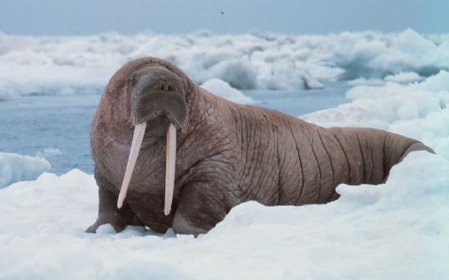 Climate change is affecting the Arctic more than any place on earth and scientists now say that change may be irreversible, thanks to polar amplification, at least on human time-scales:

(Reuters) — Arctic air temperatures were higher – about 2.5 degrees F (1.5 degrees C) higher in 2011 than the baseline number for the previous 30 years – and there was a dramatic loss of sea ice and glacier mass, the scientists said in a telephone briefing. With less bright ice to reflect sunlight, and more dark open water to absorb it, the Arctic’s changed characteristics are likely to feed on each other and accelerate.

What might the new environment be like? All things being equal, cold water holds more oxygen than warm water and loss of ice cover favors more photosynthetic alga capable of filling that oxygen niche. The result would likely be a richer food chain favoring marine creatures and penalizing those dependent on ice for part of their life cycle. Whales, fish, and squid might benefit whereas animals like polar bears, seals, and walruses would not. But the consequences would extend well beyond the Arctic Circle. Polar ice acts like a giant air conditioner for the entire northern hemisphere. Turn that AC off and it’s anyone guess when and where the ensuing climatic chaos settles into a new equilibrium, or if it settles at all.