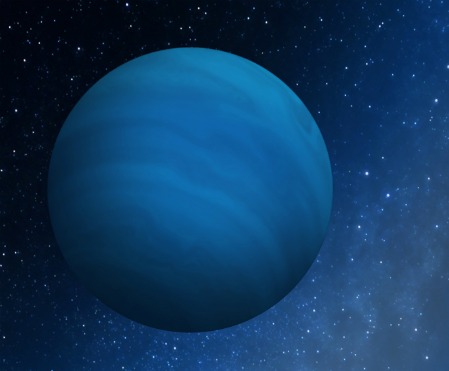 Hot Jupiter’s, possible water worlds or gas dwarfs, even one planet that could have a mantle of diamond, exo-solar planets remind us that the universe can still harbor secrets. In the last decade or two, as the number of strange exo-planetary denizens grew, it became clear that some must have migrated. Moved closer, or shot away, from their primary star. The early history of our own solar system, how the planets formed and ended up in the relatively stable configuration we see today, can be studied with the same techniques developed and refined to model those alien systems. One of the simulations that best explains the familiar worlds we know huddling around the sun comes with an extra planet, or maybe two:

(Space.com) — Instead, a model about 10 times more likely at matching our current solar system began with five giants, including a now lost world comparable in mass to Uranus and Neptune. This extra planet may have been an “ice giant” rich in icy matter just like Uranus and Neptune, Nesvorny explained. .. When the solar system was about 600 million years old, it underwent a major period of instability that scattered the giant planets and smaller worlds, researchers said. Eventually, gravitational encounters with Jupiter would have flung the mystery world to interstellar space about 4 billion years ago.

If such a world existed, and there’s no sign of it now, and there’s only two places it could have gone: into the sun or into the dark.

If its out there, somewhere, held loosely by gravity along with the retinue of comets our sun carries, we might be able to observe it one day. If it went into the sun it’s long gone. And there would have been a time, not long after heavy bombardment ended and life first arose on earth, that it would have come to close to, or may have, crossed the earth’s orbit on the way to a fiery rendezvous. Even though our planet would have had to be in a safe place at the right time throughout that period, there would have been some awful close calls.