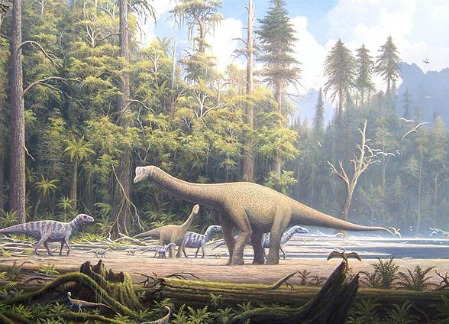 Scientists have examined remains of sauropods and found evidence they may have traveled far and wide over the course of a single year:

While these dinosaurs mainly inhabited wetland environments, such as the basin where the teeth were found, different layers of the enamel suggests they also spent time in drier climates, according to the study. The sauropods “must have directly occupied high-elevation regions for at least part of the year before returning to the basin where they died,” said Colorado College researchers led by study author Henry Fricke.

Sauropods are the giant long-necked classic dinos many of us fall in love with as kids. Some weighed the better part of a 100 tons, so it’s no surprise they traveled long distances. Between their bulk and vegetarian diet these titans had to be continually looking for new sources of plant material, paleo-biologists speculate even a small group of adult sauropods could be devastating to forests.

But sauropods had one big advantage over modern migrating land animals: the Jurassic was dominated by several giant landmasses huddling close together, including the super continent Laurasia. This ancient land mass would have allowed migrating dinos to travel more than halfway around the world if they wanted to, from modern-day Japan, west across the Middle East and Europe, all the way across North America to the westernmost coast of present day California. And for all we know, with their periscope like heads, sauropods may have been accomplished swimmers able to cross the narrow straits between other Jurassic land masses at will.

Hundreds of giant dinos on the seasonal move, perhaps wading and even swimming en masse, through shallow Mesozoic seas infested with carnivorous marine reptiles and giant sharks. What a sight that would have been!

Whatever their range, the continental arrangement was not to last. The continents would slowly drift further and further apart, the young Atlantic growing in between. How this change would have affected large animals dependent on ultra long migration routes is unknown, there’s nothing like them alive today to compare with (And the continents literally aren’t in position to cooperate anyway). But it’s fascinating to wonder, something as simple and relentless as slow plate tectonics could have been a factor in the eventual extinction of the largest land animals that ever lived.

Why are members of the Oakland police not in jail right now? » « Income for top 1% almost triples, everyone else flat or down