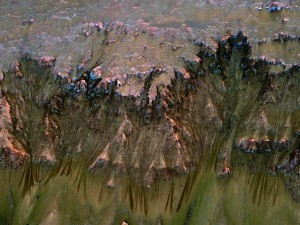 The Mars Reconnaissance Orbiter (NASA/JPL homepage) has snapped some intriguing photos of what appears to be evidence for relatively recently flowing water. The dark, dare I say almost greenish streaks, suggest sub Martian ice may have liquefied during the planet’s lengthy spring and summer and poured down a crater wall forming gullies and other features:

“The key here is we know Mars has a lot of ice, but this is the first time we’re ever seen the potential for liquid,” said Phil Christensen, a Mars researcher with Arizona State University who wasn’t involved in the research. “They’re finding water much closer to where it can be liquid through much of the year.” The initial finding was made by a University of Arizona undergraduate student, Lujendra Ojha.

The highest temperatures on Mars rarely exceed the freezing point of water on earth, but researchers speculate there may be salt and other minerals mixed in which would lower the melting point. Follow the water has become the slogan among astrobiologists. Many feel the best shot for find extraterrestrial life, including life transported by impacts between planets in our solar system, is to find the water. The solution for all life we know about is literally water. That’s why places like the Jovian moon Europa beckon.

It was thought after the Viking Missions in 1976 that Mars might be a very dry world. The Mars Phoenix lander in 2008 changed that view. Not only did the landscape revealed by Phoenix’s cameras show unmistakable signs of a phenomenon well known to geologists and hydrologists called frost heaving, the lander found large deposits of water ice a few inches below the Martian soil everywhere it looked.

The question I have for any biologist or microbiologist who wants to take a crack at it: given what we know of the Martian soil and other environmental conditions, and assuming some briny seasonal water a few inches below the surface, are there types of terrestrial bacteria that could survive? Intuition tells me there ought to be, but I’m no microbiologist.

Far from being a dry world, Mars may turn out to have quite a bit of water safely stored away as ice. And water is one of the more useful substances we can find in space. It’s not just great for drinking, it can be used to create oxygen to breath, and it can be broken down into hydrogen and oxygen, the basis of a powerful liquid rocket fuel. On Mars we may have a little world with carbon and nitrogen in the air, water underground, and enough iron and other minerals locked up in the ancient shifting sands to sustain a human colony on the Red Planet. To Mars, bitches!

Kill the atheists! » « The breathtaking double standard at Fox News