A bizarre standoff is in place in Sri Lanka where the president Gotabaya Rajapaksa, who promised to resign on July 13th and fled the country, did not in fact resign but merely appointed the prime minister Ranil Wickremesinghe as acting president during his absence from the country, though it is unlikely that he will ever return, given how much anger there is against him and his family.

Wickremesinghe is also hated and his not resigning has angered them even more. The protestors refuse to recognize him in any capacity and his appointment as acting president created more anger and the protestors invaded and occupied his office building as well, once more overwhelming by sheer numbers the security forces who tried to hold them back. So there was a Grand Slam of occupations of four premises, the official residences and offices of both the prime minister and president.

Wickremesinghe, tone deaf as usual, has imposed a state of emergency and a curfew and ordered the security forces to “do whatever is necessary to restore order” and and “end this fascist threat to democracy” and return the occupied premises to “the proper custody”. Being called fascists by someone whom they have the deepest contempt for has infuriated the protestors against him even more. By playing games with their promised resignations, Rajapaksa and Wickremesinghe are playing with fire. The security forces have so far used just tear gas and water cannons in their failed efforts to control the situation. The situation is tense and could explode if they start using live ammunition and people get killed.

Al Jazeera had an excellent program where the host had a discussion with three Sri Lankan analysts about what caused the crisis and what needs to be done to get the country out of the abyss into which it has sunk and bring back some semblance of normalcy. The discussion was somber and realistic.

The program started with extraordinary footage of people flowing in and out of what were formerly heavily guarded presidential and prime ministerial residences and the presidential office complex. We see families with small children roaming around taking photographs like those places were public museums, and people using amenities like the gym equipment and the pool and picnicking in the gardens. You can see more images here of protestors enjoying being on the premises, such as children playing a piano. 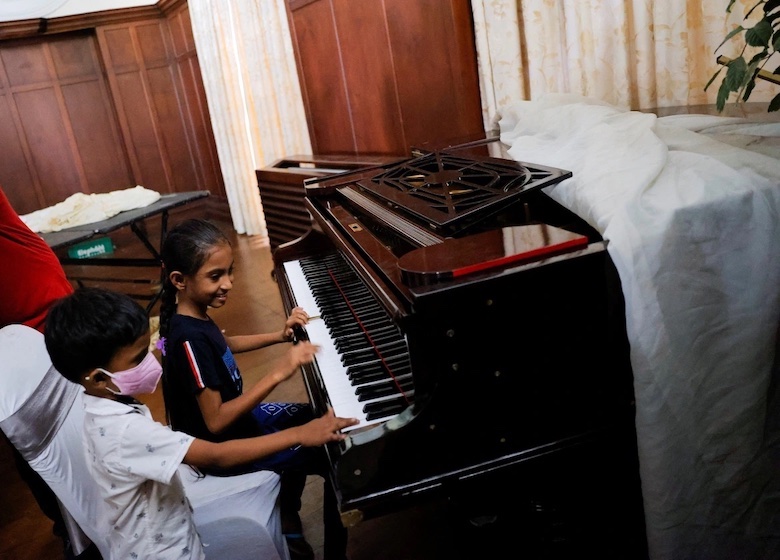 During the interview, they cut to videos of the demonstrations. In particular, beginning at the 10:30 mark, they show two minutes of the massive crowds outside the presidential offices on Saturday, the final event that brought the government down. It was a sea of people jammed together as far as the eye could see, a clear signal of the end of the government’s legitimacy.

One question that the analysts did not answer, and indeed could not be realistically expected to answer, was what the likelihood was of the Rajapaksa family being brought to trial for war crimes and human rights abuses and corruption, as well as the return of some of the looted money. That has been one of the demands of the protestors. We should not forget that the Rajapaksas were also widely viewed as ‘heroes’ for the way that the brutally crushed the Tamil Tigers, despite the large numbers of innocent people killed in the process. They won in a landslide less than three years ago and presumably still retain considerable support. Those who are still supporters have been lying low during this recent protests but you can expect them to emerge once things settle down.

There have been talks among the political parties about forming an all-party government but such a government is being rejected by the protestors because Rajapaksa’s party the SLPP still has the majority in parliament and they feel that this will enable the Rajapaksas will continue to influence events. The protestors vow to not leave the official residences and offices until both president and prime minister, who have promised to resign, actually hand in their resignations. Here are six main demands of the protest leaders as given in an Action Plan.

But all this will be contingent on some kind of alternative leadership that is acceptable to the protestors being put in place. But there is nothing of that kind so far and the situation remains very fluid.

It’s summer! Go to the beach and die » « A last ditch effort to cling to power and escape consequences