In an earlier post, I wrote about the FDA trying to stamp out the practice of some people using the livestock deworming drug ivermectin as a Covid-19 treatment. We have even reached a stage where people are going to court to force hospitals to provide it to patients.

When there is a matter of urgency like covid-19, a lot of exploratory research is done on treatments, using small samples or on animals or in petri dishes. In the age of the internet, the results of such studies can become widely known and people can seize on any positive information and think that the treatment should be freely used, even if there is the potential for danger. In the case of ivermectin, it has not yet been shown to be an effective treatment against the virus and can be dangerous in large doses. Preliminary results showed no appreciable efficacy.

Based on the current very low‐ to low‐certainty evidence, we are uncertain about the efficacy and safety of ivermectin used to treat people with COVID‐19 in the inpatient and outpatient settings and to prevent a SARS‐CoV‐2 infection in people after having high‐risk exposure. There is also no evidence available from the study pool as to which is the best dose and regimen of ivermectin. Overall, the reliable evidence available does not support the use of ivermectin for treatment or prevention of COVID‐19 outside of well‐designed randomized controlled trials (RCTs).

Clearly both prevention (using vaccines) and treatments should be explored. But prevention is to be preferred since it is always easier to do that with a simple injection than treating acute medical conditions. But we are long past the time for such subtleties. We are now in a situation where people seem to have chosen sides in the prevention and treatment debate and rather than seeing them as complementary paths that should be both pursued, now see them as enemies.

This trend had caught me unawares and I became curious as to how it originated and this article clued me in. It started with small studies during the early days of the pandemic, a time of desperation when people were exploring all manner of options, that suggested that this cheap and plentiful drug may have some benefits in treating covid-19. But when scientists started examining it more closely using standard protocols, they encountered a hostile reaction.

The University of Minnesota physician and infectious disease researcher [David Boulware] had seen a few small but encouraging studies on the drug, which was most often used by vets to treat parasites in horses and sheep (and sometimes lice and scabies in people). Boulware, who specializes in running clinical trials, set up the study early in 2021 with a methodology considered to be the gold standard: the randomized controlled trial, where one group of patients receives the drug, and the other gets a placebo.

In May, Boulware’s team put the word out about the study, aiming to recruit 1,100 volunteers. But then something strange happened: He began receiving hostile emails and messages on Twitter from people who fervently believed that ivermectin was a miracle cure for COVID-19 and that administering a placebo to some trial participants was therefore unethical. “Are you a reembodied NAZI Josef Mengele?” wrote one in an email. “WHAT ARE YOU THINKING? Eliminate your plan to abuse people as needless controls. You have a duty of care.”

Boulware was stunned. In decades of running similar trials for diseases including HIV/AIDS and tuberculosis, he had never received any feedback from strangers, let alone hate mail. But as all things COVID-19 seem to have become politicized, so too has clinical research. There is a growing divide between people who believe the key to ending the pandemic is in preventive measures—vaccines, masks, and distancing—and those who favor treatments. Clearly, these two public health approaches should not be mutually exclusive, but somehow in the current climate, they are. Angela Reiersen, a clinical researcher who is studying potential COVID treatments at Washington University in St. Louis, has seen this pattern play out on her own Twitter feed. “If I post something about vaccines as positive, then I will have a lot of people jumping on that and attacking me, and it’s these people who are all pro early treatment,” she told me. When she tweets good news about potential treatments, on the other hand, she has noticed that she provokes the ire of vaccine advocates. “They kind of seem to suppress any information about early treatment,” she said, “maybe because they feel like it’s going to make people think they don’t need to be vaccinated.”

Often, but not always, the divide is partisan, with the left on Team Prevention and the right on Team Treatment. President Trump sowed the seeds for this dynamic with his full-throated endorsement of the malaria drug hydroxychloroquine. Even after it turned out to be a dud, Trump, Fox News, some right-wing physicians, and other right-wing media outlets continued to tout its supposed benefits. As it happened, a raft of studies, including preliminary results from the first large trial, ultimately found that ivermectin was not terribly effective at treating COVID-19. Accordingly, Boulware has since moved on to studying other drugs (including a promising antidepressant called fluvoxamine, which I’ll come back to later). Yet despite the evidence against ivermectin, the same conservative pundits who promoted hydroxychloroquine have now taken up the ivermectin cause, and, with scant scientific evidence, tout both ivermectin and hydroxychloroquine as highly effective treatments.

Physicians prescribing “off-label” uses of drugs to treat patients for whom the standard treatments are not appropriate, and rigorous double-blind studies to see if that treatment is generally effective, are not mutually exclusive practices.

[T]here is one key piece of nuance that has been lost in outlets’ breathless reporting about treatments that don’t seem to work. In some cases, it may be appropriate for a doctor to prescribe a COVID drug for which the evidence is mixed or not robust—say, if a patient is suffering from a condition that disqualifies them from receiving standard treatment. When prescribing drugs, physicians generally follow guidelines from the National Institutes of Health, which are based on an extensive body of studies and clinical trials. But these guidelines aren’t law. Also, because they look at overall evidence of benefit to a population rather than focusing on individual patients, there are legitimate reasons to deviate from them. If doctors think certain drugs might help a patient for specific reasons, they are allowed to—and regularly do—prescribe drugs “off-label,” or for a purpose that’s different from their approved use. Currently, the NIH recommends only a few COVID-19 drugs for outpatients at risk of severe complications—certain kinds of monoclonal antibodies, as well as some steroids.

Part of the problem is that running large-scale clinical trials to show that a drug that has shown some promise in lab tests or with animals or in small trials works on a large scale is expensive and usually, at least in the US, is at least partly funded by drug companies hoping to reap profits later. But if the drug is already available cheaply or in generic form, then getting funding for such studies is not easy unless governments are willing to do it.

All these are important questions that should be explored but doing so thoughtfully is hard because we seem to have reached a stage where pretty much every issue where there are multiple options quickly devolves into a partisan binary battle where people are expected to choose sides and the other is viewed as the enemy.

I was under the impression that if a patient is on the verge of death, then one can usually get approval for emergency use of an experimental treatment or for off-label use. It is not clear what the situation is concerning the patient for whom the judge ordered the ivermectin treatment. 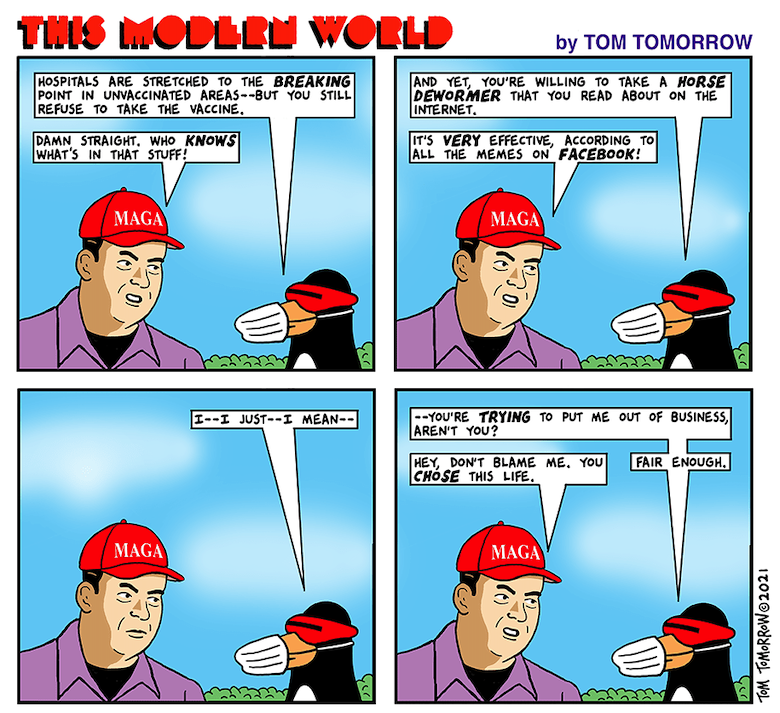 Michael Kosta thinks there may be a way to reach the ivermectin enthusiasts.

The desire for fleeting fame can lead to unnecessary and dangerous risk taking » « Who hasn’t encountered people like this?