Service dogs aid many people, not just those with sight deficiencies, and as such are allowed into many areas that do not allow animals. But recently there has been an increase in the numbers of people who say they need the presence of emotional support animals that are not service dogs to overcome their anxieties, such as when they fly. This has resulted in airlines being faced with having to make ad hoc decisions as to whether to allow them or not. 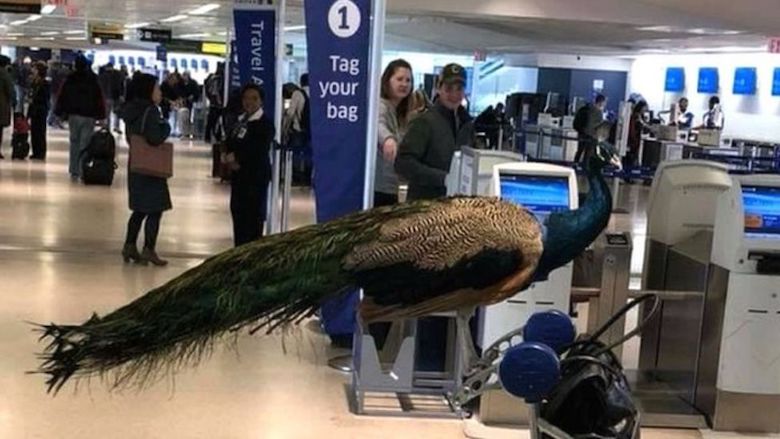 Now it appears that they have decided to draw the line. I was surprised to read the variety of animals involved.

US airlines will no longer be required to transport emotional support animals after passengers insisted on bringing on board their horses, pigs, peacocks and turkeys for psychological reasons.

Wednesday’s rule change by the US Department of Transportation now says only dogs qualify as service animals.

The agency said unusual animals on flights had “eroded the public trust in legitimate service animals”.

Airlines say the old policy had been abused and was dangerous.
…

Previously, the federal government had no law regarding emotional support animals, which effectively required airlines to accommodate them as service animals despite complaints from passengers. Unlike pets, they were allowed to travel for free under the law known as the Air Carrier Access Act.
…

Unlike service animals, emotional support animals are not required to have been trained to perform a specific task. There have been several incidents of unruly animals causing injuries to passengers and flights crews. Some of those incidents have led to lawsuits.

Wait, horses? Where do they sit? Can they even walk down those narrow aisles? Even that peacock above would create a challenge.

Expect a flurry of lawsuits.

Comparing the Biden and Obama administrations » « Are the monoliths part of a marketing scheme?