We are used to envisaging Abraham Lincoln as an older, bearded man, formally attired, the way he is presented in the memorial to him in Washington, DC. Pretty much all official representations of Lincoln adopt that basic look. Hence I was startled to come across this image of an 8-foot tall statue of a young Abraham Lincoln situated in a Los Angeles federal courthouse where he looks like he was posing for a Ralph Lauren ad, though the statue was commissioned eighty years ago. 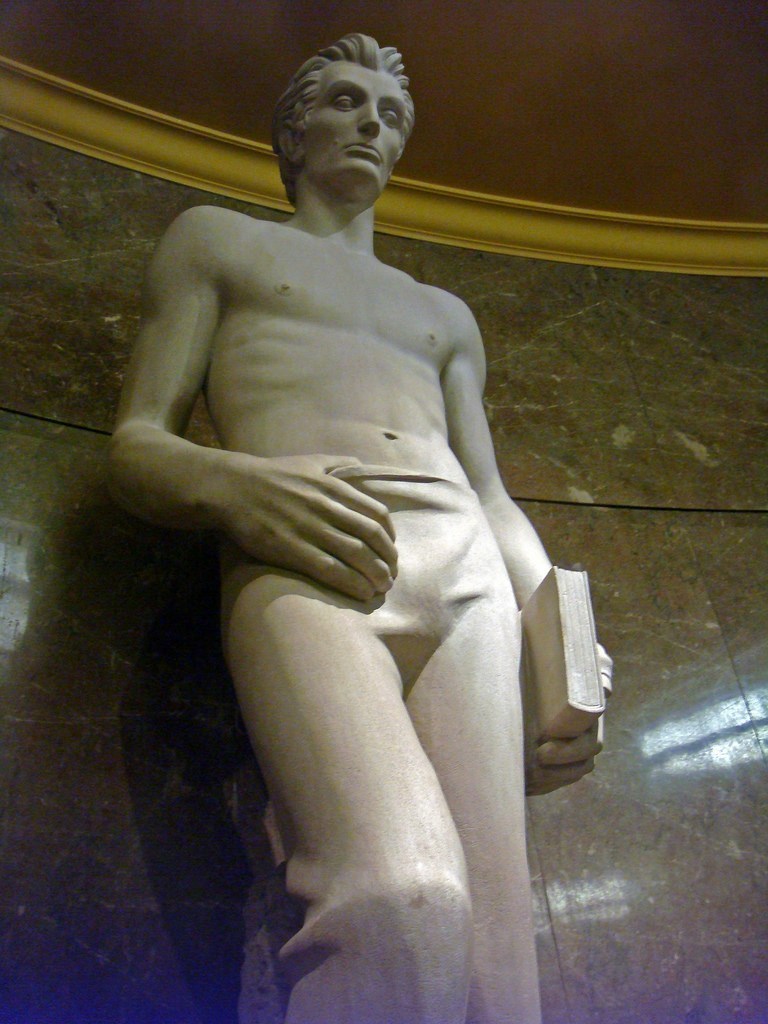 Rusty Blazenhoff links to a 1941 article in the Los Angeles Times that explains how the sculpture by 23-year old James Lee Hansen came to be, that has now spawned witticisms like ‘Honest Abs’ and ‘The Gettysburg Undress’.

A year ago last August he was a student at a local art school, but was discouraged and dissatisfied with his progress. He was on the point of departing for New York to seek some art commissions to keep the wolf from his studio door.

A friend asked, “Why don’t you enter that government competition for a statue at the new Federal Building?”

“I don’t know,” Hansen replied, “I’ve only done one piece of sculpture in my life.”

He was interested, however, and checked up-only to find that the contest, under way for several months, closed for the model entries in a week. Hansen got a supply of plaster and made a small figure of Lincoln. Like the other contestants, he submitted it anonymously to the Fine Arts Section of the Federal Works Agency.

No one was more surprised than Hansen when he was notified his entry has won $7,200 and a commission to do the Lincoln statue. Within a year it was fashioned from Indiana limestone.

The pose shows Lincoln as a young man, wearing only a pair of jeans, with the thumb of one hand hooked in the band of the garment and with a book in the other hand.

Hansen shrugged off observations to the effect that his job had been criticized because Lincoln is shown without a shirt or shoes.

“Well, from a sculpturing standpoint, it’s better to show the body without any clothes,” he explained. “That’s why I left ’em off.”

Imagine the uproar if a government entity commissioned such a portrayal now.