UPDATE: Here is a link to live coverage of the event.

I love the way the students are ridiculing the ‘thoughts and prayers’ escape route (and its putative substitute ‘prayers and condolences’) favored by politicians to not take action or even debate the issue.

About 500,000 people are expected to attend the rally to end gun violence in Washington, DC along with satellite rallies around the country. Pro-gun counter-demonstrations are also expected at various places. In DC it is being sponsored by the NRA and will be held, tellingly, at the Trump hotel. Donald Trump has decided that it is perhaps safer to be away from DC today and has gone to Florida presumably to play golf because that is more important to him that discussing what to do about gun violence with articulate and determined high school students.

Starting at noon US Eastern Time, Democracy Now! will have a live broadcast of the events and The Guardian has a live blog of the events of the day, with photographs that show large numbers of young people already there. 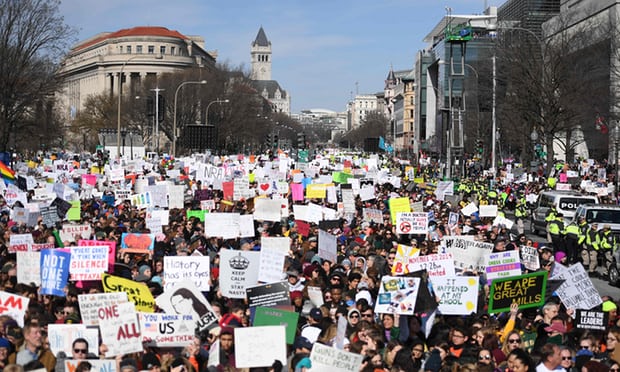 The journalists of the Marjory Stoneman Douglas high school newspaper are on the ground in the demonstration interviewing people and sending in videos like this one.

I think the NRA will be worried, or should be if they have any sense, by this massive show of activism by young people. Such events at such an age can be formative in shaping views. It may be hard for adults to remember the strong feelings that are generated by taking part at a young age in a massive movement for change. While young people have been heavily involved with the movements for women’s rights, LGBT rights, and action on climate change, this is the first time they have been leaders and front and center rather than in supporting roles. That can be life-changing.