As a result of the way that the CIA leaks have fueled the coverage of the links between Donald Trump and his associates, partisan opinions about the CIA have shifted dramatically from the way it was perceived when this question was last polled in 2015 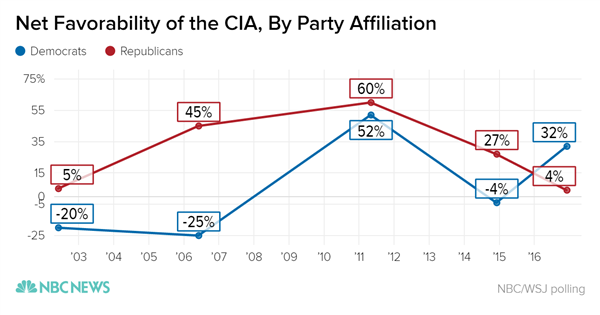 An NBC/WSJ poll from 2015 showed Republicans viewing the CIA with a net favorability of 27%, versus -4% from Democrats.

The divide in the latest poll was even steeper between Trump supporters and those who supported his Democratic opponent, Hillary Clinton. The CIA had net favorability of 39% among Clinton supporters in December, compared with 2% among Trump supporters.

This is another example of where people are viewing actions and institutions through a partisan lens, whether they are helping or hurting ‘our side’, instead of based on objective factors. Matt Taibbi warns the media and the Democratic party that by depending on anonymous sources within the intelligence community and overhyping every aspect of the connections between the Trump campaign and the Russian government, they may be walking into a minefield.

Reporters should always be nervous when intelligence sources sell them stories. Spooks don’t normally need the press. Their usual audiences are other agency heads, and the executive. They can bring about action just by convincing other people within the government to take it.
…

Thus we are now witnessing the extremely unusual development of intelligence sources that normally wouldn’t tell a reporter the time of day litigating a matter of supreme importance in the media. What does this mean?
…

Hypothesize for a moment that the “scandal” here is real, but in a limited sense: Trump’s surrogates have not colluded with Russians, but have had “contacts,” and recognize their political liability, and lie about them. Investigators then leak the true details of these contacts, leaving the wild speculations to the media and the Internet. Trump is enough of a pig and a menace that it’s easy to imagine doing this and not feeling terribly sorry that your leaks have been over-interpreted.

If that’s the case, there are big dangers for the press. If we engage in Times-style gilding of every lily the leakers throw our way, and in doing so build up a fever of expectations for a bombshell reveal, but there turns out to be no conspiracy – Trump will be pre-inoculated against all criticism for the foreseeable future.

Masha Gessen, a Jewish lesbian mother of three who fled Russia in 2013 to escape that country’s anti-LGBT, anti-Semitic movements and is a harsh critic of Russian president Putin’s role in fomenting that poisonous atmosphere, also warns that creating complex theories based on anonymous intelligence sources and in the absence of solid evidence is not only distracting but dangerous.

Given that the story has been driven by the intelligence community and the media, it is perhaps unsurprising that each subsequent revelation creates the sense of pieces falling into place.
…

The dream fueling the Russia frenzy is that it will eventually create a dark enough cloud of suspicion around Trump that Congress will find the will and the grounds to impeach him. If that happens, it will have resulted largely from a media campaign orchestrated by members of the intelligence community—setting a dangerous political precedent that will have corrupted the public sphere and promoted paranoia. And that is the best-case outcome.

More likely, the Russia allegations will not bring down Trump. He may sacrifice more of his people, as he sacrificed Flynn, as further leaks discredit them. Various investigations may drag on for months, drowning out other, far more urgent issues. In the end, Congressional Republicans will likely conclude that their constituents don’t care enough about Trump’s Russian ties to warrant trying to impeach the Republican president. Meanwhile, while Russia continues to dominate the front pages, Trump will continue waging war on immigrants, cutting funding for everything that’s not the military, assembling his cabinet of deplorables—with six Democrats voting to confirm Ben Carson for Housing, for example, and ten to confirm Rick Perry for Energy. According to the Trump plan, each of these seems intent on destroying the agency he or she is chosen to run—to carry out what Steve Bannon calls the “deconstruction of the administrative state.” As for Sessions, in his first speech as attorney general he promised to cut back civil rights enforcement and he has already abandoned a Justice Department case against a discriminatory Texas voter ID law. But it was his Russia lie that grabbed the big headlines.

Imagine if the same kind of attention could be trained and sustained on other issues—like it has been on the Muslim travel ban. It would not get rid of Trump, but it might mitigate the damage he is causing. Trump is doing nothing less than destroying American democratic institutions and principles by turning the presidency into a profit-making machine for his family, by poisoning political culture with hateful, mendacious, and subliterate rhetoric, by undermining the public sphere with attacks on the press and protesters, and by beginning the real work of dismantling every part of the federal government that exists for any purpose other than waging war. Russiagate is helping him—both by distracting from real, documentable, and documented issues, and by promoting a xenophobic conspiracy theory in the cause of removing a xenophobic conspiracy theorist from office.

There are many awful things that Trump and his cronies are doing now (the health care plan for one, his deregulation zeal, the cutting of the budgets of those programs that help poor people) that are going to harm a LOT of people and risk new wars. There is also the wide stench of corruption surrounding Trump and his family’s business dealings around the world and whether he is using his office to profit himself and them.

The rise of anti-Semitic acts in the US » « Any guess as to when and where this photo was taken?