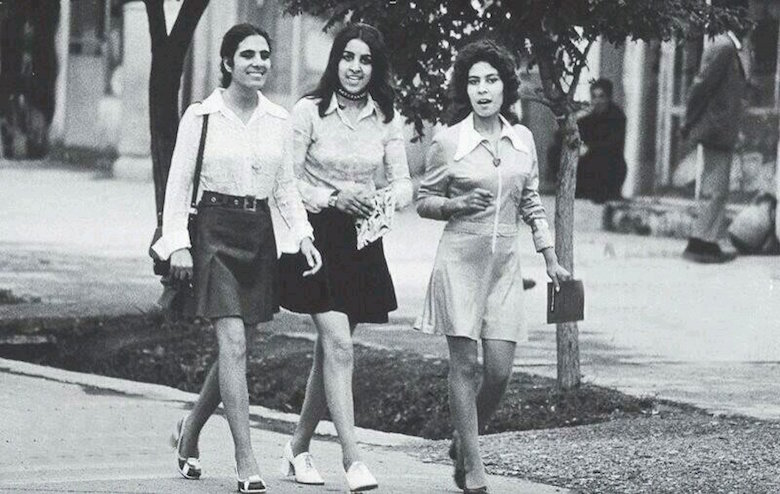 It is not hard to note that the clothing styles suggest the 1960s and 1970s. In fact this was taken in 1972. The difficult part is the country. This was actually taken in Kabul, Afghanistan and provides a stunning reminder of how relatively liberal the country was in the past when women could walk freely down a street dressed like that.

Think of women in Afghanistan now, and you’ll probably recall pictures in the media of women in full-body burqas, perhaps the famous National Geographic photograph of ‘the Afghan girl’, or prominent figures murdered for visibly defending women’s rights. But it hasn’t always been this way.

‘As a girl, I remember my mother wearing miniskirts and taking us to the cinema. My aunt went to university in Kabul.’

Until the conflict of the 1970s, the 20th Century had seen relatively steady progression for women’s rights in the country. Afghan women were first eligible to vote in 1919 – only a year after women in the UK were given voting rights, and a year before the women in the United States were allowed to vote. In the 1950s purdah (gendered separation) was abolished; in the 1960s a new constitution brought equality to many areas of life, including political participation.

Thanks to the Taliban and reactionary politicians and clergy, women suffered drastic setbacks in rights and were required to be covered up and not appear in public unaccompanied by a male guardian. With the overthrow of the Taliban, it appears that some of the most onerous restrictions have been lifted but women are still struggling to get the right to do many of the things that women in other parts of the world take for granted. And the influence of the Taliban remains strong especially in the rural areas.

One simple rule of thumb that I use for how well-structured a society is the extent to which women have full equality, not just in terms of jobs, income, and wealth, and but also in terms of social factors like educational opportunities and roles played in the family and institutions.

Yesterday was International Women’s Day (for the fascinating history of this day and its roots in socialism, see here) and there were rallies and marches and celebrations all over the world and here are some great photos of those events celebrating but also calling for full equality. While the status of women has generally improved since the first women’s day observance in 1909, the history of Afghanistan shows that we can never be assured that any gains once won cannot be taken away.