There is a very strange news story emerging from a Cleveland suburb near where I live. Since March 2014, someone has been throwing eggs at the front of a house occupied by an 85-year old man. This was not some isolated random prank by a child or a by a disgruntled trick-or-treater who decided to get their revenge long after Halloween. This has been a sustained attack of more than 100 eggs. These eggs were projectiles launched from a distance and hitting the house with remarkable accuracy. 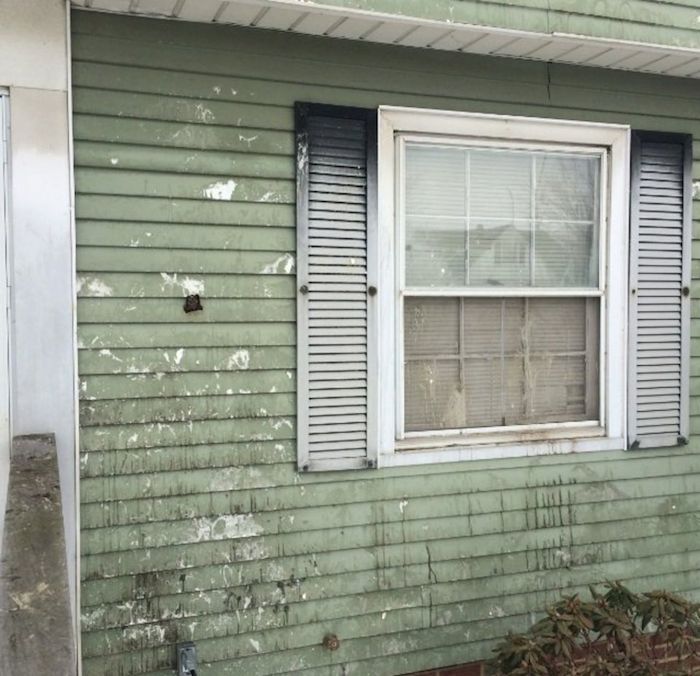 “The accuracy is phenomenal,” Albert Clemens, Sr. said. “Because almost every time when it’s nice weather and they launch five or six of these at a time, they almost invariably hit the front door.”
…

The house has been pelted with eggs several times a week — sometimes more than once a day — for the past year. The attacks always happen after dark and last around 10 minutes each.

The family has been awoken as late as 2 a.m. by what sounds like the crack of a gunshot against the aluminum siding or front door. Clemens and police believe the eggs are being launched from a block or two away.

The siding on the front of Clemens’ home is destroyed, splattered with dried egg residue that stripped off the paint. Other than a few rogue eggs that hit nearby homes, no other neighbors have been targeted.

The local police are not treating this lightly but are baffled as to the method and motive.

They’ve spent a year doing undercover stakeouts, canvassing the neighborhood and even sending eggshells for testing.

The department’s entire community policing unit was dedicated to tracking down the eggers at one point. Officers respond quickly to every egging call at the home — which is less than a mile from the police station.
…

Investigators have taken several different approaches to nabbing the eggers, including installing a surveillance camera on the house.

Detectives even collected some eggshell samples and tested them in a crime lab. The eggs were traced back to a local Amish farm, but the trail ended there.

Clemens says the culprits either have access to a large supply of eggs or are stealing them from businesses that throw them out when they go bad. Detectives have followed this thread, visiting local restaurants and businesses asking about missing eggs.

The guilty parties don’t appear to be intimidated by police interest in the case. An officer last year was taking a report when a barrage of eggs was launched at the house. One hit him in the foot.

Houser said he’s never seen this level of vandalism in his 20 years of police work. It’s frustrated the whole department, which has dedicated hundreds of hours toward solving the egging mystery.

Apart from the mystery of who is doing this, I was also interested in the science of how they did it. It is not easy to use eggs as high velocity projectiles because the shell is so thin. While potato launchers are easy to build and operate (they are a popular activity in middle and high school physics classes), launching an egg is something else altogether. I am not sure how you can fire an egg so hard as to go for a block or two without it shattering within the launcher itself. In order to keep the force on the egg small enough to avoid shattering the shell, the eggs would need a small acceleration, which requires long acceleration times to get the desired speed, coupled with a very soft driver of the egg. What kind of device would that require?

Given the accuracy of the aim, my guess is that the eggs are not being fired from a couple of blocks away but instead are coming from the back yard of one of the houses that are directly opposite the targeted house, using a large catapult-type launcher, like a long piece of rubber tubing mounted between two supports, with a soft pocket which holds the egg. The eggs are then fired over the roof of the culprit’s house to the target house. If I were police, I would check the backs and roofs of the houses that are opposite since there are likely to be traces of eggs that went awry during the period when the egger was perfecting his or her aim.

However it was done, the person must really hate Clemens to go to all this trouble to egg his house.

This looks like a case that Sherlock Holmes would enjoy, since he was always more attracted by the strangeness of a case than by the severity of the crime.