I have been railing about the fact that so many films that I have seen recently are too damn long and would benefit from much tighter editing. But is it in fact the case that films are actually longer than they used to be? I intuitively thought they were but the data don’t seem to back me up.

Randy Olson has combed through the IMDb site and for each year calculated the average lengths for each of the top 25 films from 1931 to 2013 and this is what he gets, with the blue region representing the 95% confidence interval. 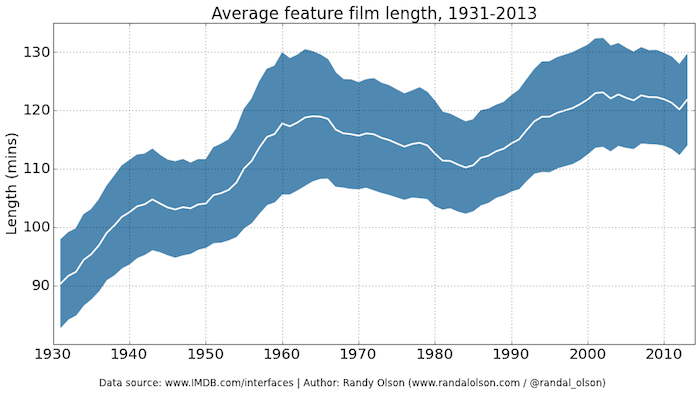 While there was a rapid increase until the 1960s (which Olson speculates may have been spurred by the introduction of TV in the 1930s), it has remained fairly flat after that.

It is possible that the top 25 films are not the best measure and that they were more popular partly because they were not too long.

But he also looked at all the films in the database and the result does not change: a rise until the 1960s and then flat. The main difference is that the overall average was around 85 minutes (which to me is a good length) while the average for the top 25 was slightly over two hours. 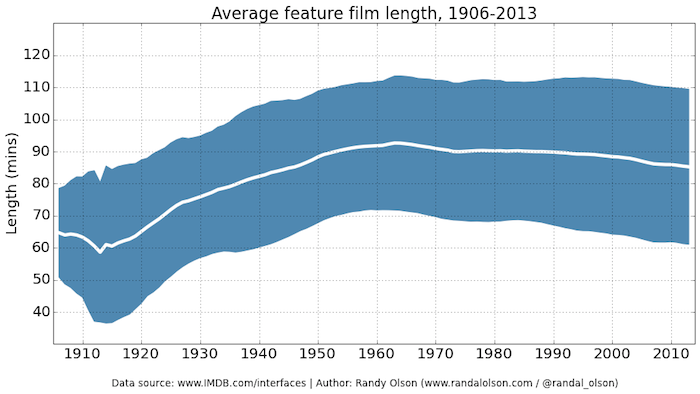 So if films haven’t got longer, what explains my personal sense that they have?

One possibility is that my tastes have shifted towards the top 25 films so that it is my own fault. The problem with that is that I do not find the action blockbusters with special effects all that appealing and those also tend to be the longer films.

Another is that I my criticisms were based on English language feature films and it may be that that particular subset has got longer.

The third possibility is that I am now older and crankier and have less patience with things dragging on and on and so it is merely my perception of the length of films that has changed.