I find it surprising that male circumcision is still considered to be an acceptable practice although female circumcision is not. I am well aware that the latter is far more serious than the former but both irreversibly violate the bodily integrity of a child and should not be allowed. Those who believe that the practice provides some benefit can choose to do it for themselves when they become adults.

Hence I was encouraged to learn from Pharyngula that a German court agrees that this causes ‘bodily harm’ and has outlawed the practice in a case involving a Muslim boy who became seriously ill as a result of it. Naturally this has outraged Jews and Muslims who routinely practice circumcision. I totally agree with the judges who concluded that “circumcision contravenes the interests of the child to decide later on in life about his religious beliefs” and that “the fundamental right of the child to bodily integrity outweighs the fundamental rights of the parents”.

I have stated my arguments against circumcision, which is based on the extremely dangerous idea that parents can force their religious practices on their defenseless children, at some length in a post a couple of years ago, but Jesus’s response to Moses and Mo sums it up pretty well, with a couple of great double entendres thrown in. 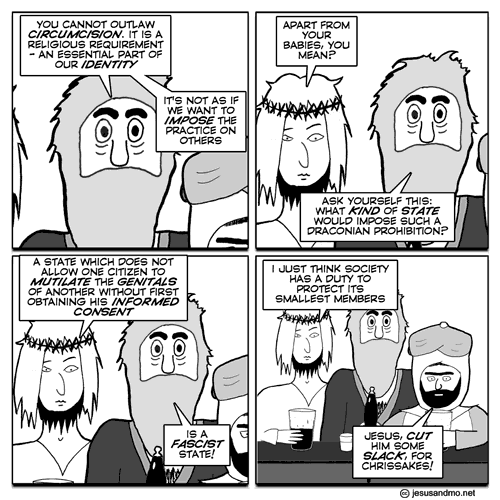