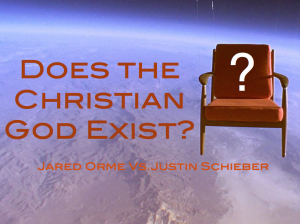 For this RD Extra, we give you a lengthy debate on the existence of the Christian god. Arguing in the affirmative is apologist Jared Orme of Conversion Points Radio and in the negative, Justin Schieber. Reasonable Doubts wants to thank Jared for the time and effort he put into this exchange