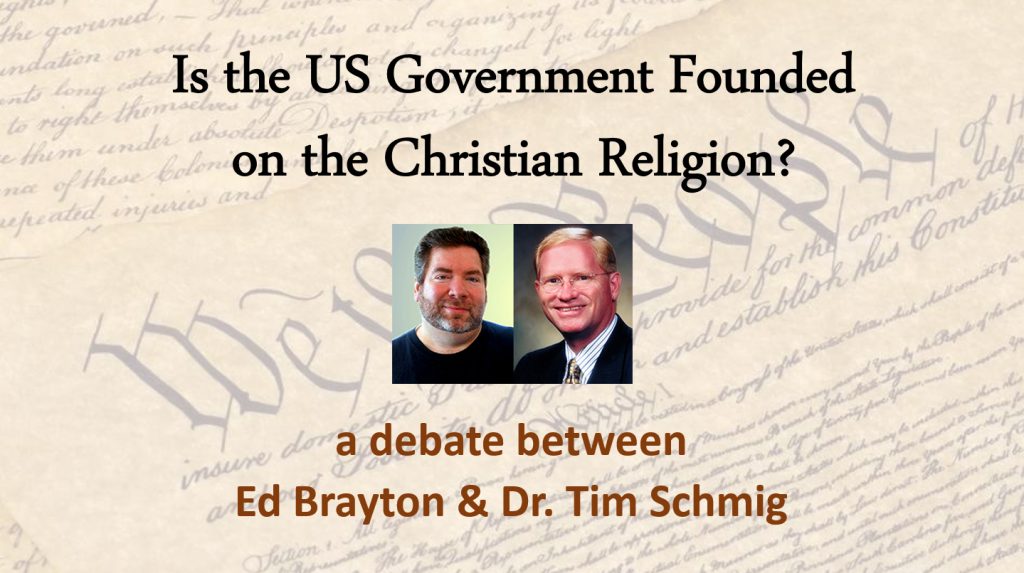 This RD Extra features a debate between Ed Brayton and Dr. Tim Schmig. The debate took place on November 12, 2014 at CFI Michigan in Grand Rapids.

Ed Brayton is the founder and owner of the Freethought Blogs Network and the voice behind the popular blog Dispatches from the Culture Wars. He is the co-founder and past president of Michigan Citizens for Science and the recipient of the Friend of Darwin Award from the National Center for Science Education and has appeared on The Rachel Maddow Show, The Thom Hartmann Show, and C-SPAN. Ed is also a current member of CFI Advisory Board. Brayton argued for the resolution “That the government of the United States is not, in any sense, founded on the Christian religion.”

Arguing against that resolution is Dr. Tim Schmig, the Executive Director for the Michigan Association of Christian Schools. Tim Schmig has taught High School History, Social Studies, Government and Economics for 5 years in two different Christian Schools. He holds a Doctorate of Literature in Ministry from Maranatha Baptist Bible College.Tim spends much time in Washington D.C. and Lansing meeting with elected officials and has earned respect and garnered influence on both sides of the political aisle.

Reasonable Doubts would like to thank Ed Brayton and CFI Michigan for letting us share this debate, as well as a special thanks to Mike Slomka for helping capture the audio. Reasonable Doubts will be back with another regular format episode on December 15th.