Our cognitive faculties evolved to help us detect agents in our environment and to predict the content of their minds but those same faculties also generate beliefs in supernatural minds and divine agents. While this seems to suggest that religious intuitions are untrustworthy by-products of ordinary cognitive processes, Cognitive psychologists like Justin Barrett argue  the existence of these “god-faculties” in the brain should not make the atheist more comfortable with their skepticism. In fact, Barrett believes they actually provide a defeater for atheism.

Counter-Apologetics / God Thinks Like You Crossover: Do Cognitive Faculties for Religious Beliefs argue for Theism or Atheism?

The fact that our cognitive faculties produce immediate, non-inferential beliefs supporting some of our most basic assumptions (an external world, the existence of mind, the validity of logic, etc.) should provide some epistemic assurances against extreme skepticism. Since our faculties seem aimed at forming true beliefs about the world, we have reason to trust them until we find evidence to the contrary. Building from this epistemlogical foundation, Justin Barrett and Kelly Clark argue we also have warrant to believe in God, since the same faculties that produce beliefs in agents and other minds also produce belief in Gods. Furthermore, Barrett insists the atheist cannot claim the mind’s god-faculties are unreliable without undercutting the foundations of a naturalistic worldview. Jeremy Beahan and Luke Galen look at the philosophy and science behind these arguemnts, and draw a differnt conclusion.

This polyatheism is the first in a three part series on the zany adventures of the Irish mythological hero Cu Chulainn.

Links:
Satanic Coloring Book distributed to Florida children (and a pdf of the book)

We are proud to offer Reasonable Doubts without advertisements and free of charge. We rely on your generosity. If you enjoyed this episode please consider donating to Reasonable Doubts to help us cover our costs. 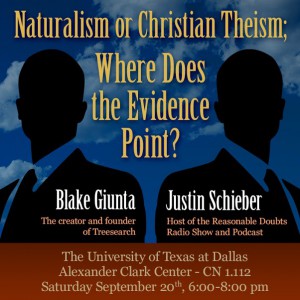 Justin Schieber is co-host of the Reasonable Doubts Radio Show and Podcast and serves on the advisory board of the Grand Rapids, Michigan chapter of Center For Inquiry. Promoting a friendly, yet firm, skepticism toward religious claims, Justin has lectured and debated on the philosophical arguments for and against the existence of God across United States and Canada.
Find him online at: Justinsweh.com

Blake Giunta is the creator and founder of Treesearch, an interactive debate map designed for easily navigating and exploring otherwise complex debates surrounding the truth of Christianity. Blake has been studying apologetics and related topics as an enthusiast for over ten years.
Find him online at: Treesearch.org

Does God approve actions because they are good? Or is an action good because God approves it? Euthyphro’s Dilemma is perhaps the oldest challenge to a theistic conception of morality, but many modern philosophers of religion believe the dilemma to be a false one. While the traditional formulation of the dilemma may have an answer, Socrates’ challenge lives on in a new form.

Philosophers such as  William Alston, Robert Adams and William Lane Craig, believe they can split the horns of Euthyphro’s Dilemma by looking to God’s nature as the standard of goodness, but in a fascinating paper Jeremy Koons has devised a new version of the dilemma which exposes this conception of divine goodness as unintelligible.

Links:
Can God’s Goodness Save the Divine Command Theory From Euthyphro? By Jeremy Koons

God Thinks Like You: The Moral Psychology of an Anthropomorphic vs. Theological God Concept

How one conceives the nature of God can have a powerful impact on how one views violations of his commandments. When believers embrace a more anthropomorphic view of God, they are more prone to judging minor violations of religious teachings as immoral.

Special Focus: How religion stunts innovation, and other musings on the conflict between science and religion

A new study argues highly religious countries have less scientific innovation then more secular ones, even after numerous variables are controlled for. While its unclear what is the cause behind the relationship, carefully designed experiments have shown how a scientific view of the world can be at odds with religious views, especially in regards to ones view of the soul and our connection to nature.

Science and Religion Really are Enemies After All by Chris Mooney
Neuroscience and the soul by Preston, Ritter & Helper
Faith and Nature by Vess, Arndt & Cox

The continuing misadventures of Sam and Johnny Mullet

Church Of England Will Allow Women To Serve As Bishops

We are proud to offer Reasonable Doubts without advertisements and free of charge. We rely on your generosity. If you enjoyed this episode please consider donating to Reasonable Doubts to help us cover our costs.