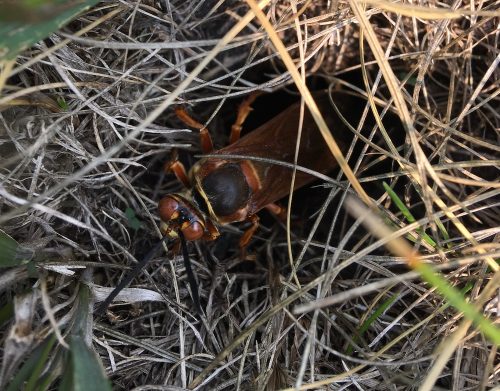 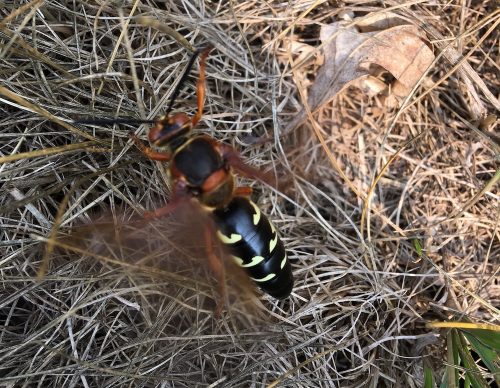 Yes, please, make yourself right at home. Do you have more family you can invite over? August is coming soon, and it’ll be time for a feast. Please do. Kill all those wretched noisy shrill shrieking beasts and dismember their bodies and chew on their guts, thank you very much.

Not a bright red cardinal on new-fallen snow, that’s for sure. 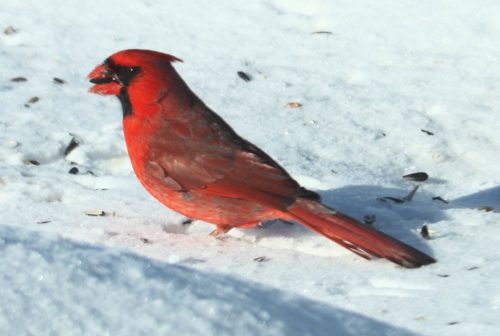 My wife’s butterfly garden is successful — I looked outside and the backyard was filled with Painted Ladies and bumblebees. I’m going to need to get some bigger spiders. 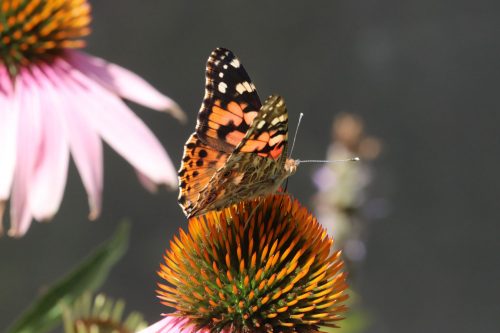 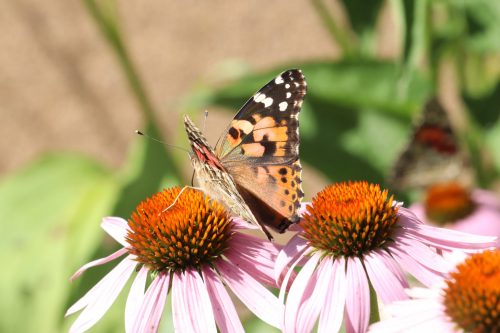 We went on a stroll last night, looking for spiders, and we didn’t find many…but I did stumble across this scene. 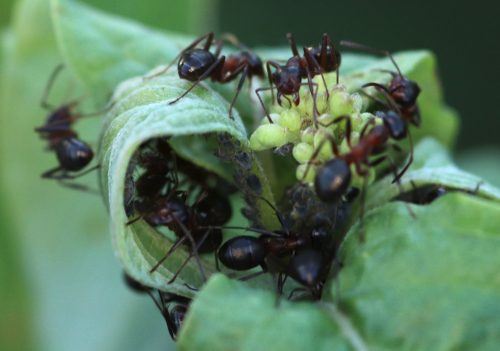 Does anyone else feel like ants are plotting something? I refuse to dig further. I’ve got enough on my plate with the spiders.

I get a bit of grief about showing spider photos, but have you ever seen closeups of insects? Sheesh. Hairy angular beasties with intricate mouthparts and creepy genitalia jutting out. I don’t know how anyone can stand to look at them. 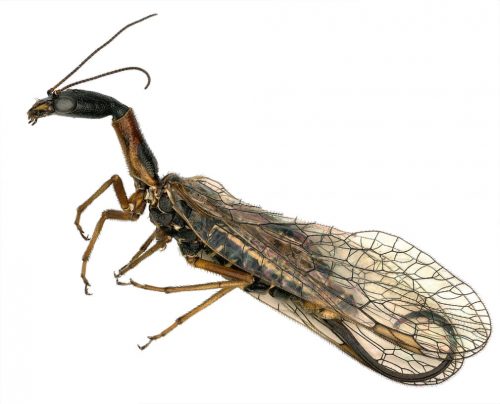 Anyway, take a look at the gallery and shudder. You can reassure yourself that good, sweet, adorable spiders will eat them all.

Whoa. This is a siphonophore colony, 15 meters in diameter, just floating in the ocean with tentacles dangling down to catch prey.

Omg I have CHILLS. This is an ANIMAL. I'm guessing it's over a hundred feet long, forming a spiral in the middle of the deep sea. I've gone on numerous expeditions and have never, EVER, seen anything like this. Let me tell you what this is and why it is blowing my mind [a thread] https://t.co/6SoWmfxsJH

I read the whole thread and didn’t see an answer to the question that immediately popped into my head. This is a colonial aggregate of multiple siphonophore bodies linked together into a long string, but it has an overall form of a spiral. How? Is there local signaling going on to regulate the distance between the strands so that it spontaneously forms that structure, or is it an accident of currents? I’m going to guess the former, which would be most interesting, because it implies the existence of factors that lead to large scale form and is therefore the kind of process that would lead to more elaborate patterns of development.

Also, it’s so planar. Is this something the animal regulates, or is it just layers in the ocean maintaining it?

I think the title is a double entendre in Australian, but it’s not a language I am fluent in. Anyway, a paper in Nature describes an assortment of organisms found in amber from Australia and New Zealand, ranging in age from 230 million years to 40 million years. It’s lovely stuff. 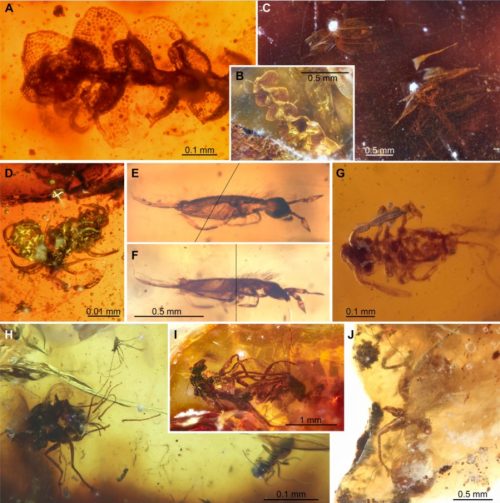 Significant bioinclusions of plants and animals in Southern Gondwana late middle Eocene amber of Anglesea, Victoria. (A to B) Liverworts of the genus Radula (Marchantiophyta: Radulaceae). (C) Two stems with perfectly preserved phyllids or leaf-like structures of mosses of the genus Racopilum (Bryophyta: Racopilaceae). (D) Juvenile individuals of spiders. (E to F) Springtail of the living genus Coecobrya (Entomobryomorpha: Entomobryidae) in two views. (G) A Symphypleona springtail. (H) Light photograph of large piece of yellow amber with two dipterans, Dolichopodidae at left and Ceratopogonidae at right, and at top of image a mite of the living genus Leptus (Arachnida: Acari: Trombidiformes: Erythraeidae). (I) Dipterans of the family Dolichopodidae (long-legged flies) in copula. (J) Worker ant of the living genus Monomorium or a “Monomorium-like” lineage (Hymenoptera: Formicoidea: Formicidae).

I don’t know about you, but I was most interested in D, the two juvenile spiders.

Wait, I do know about you — you’re most interested in I, the two flies caught in the act. So here’s a closeup. 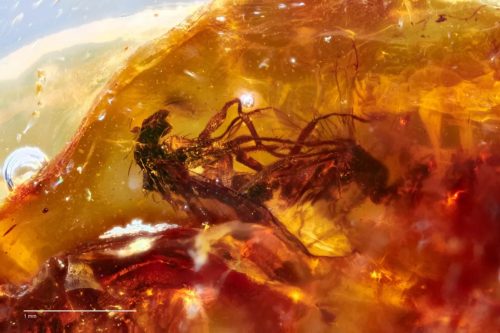 Count yourself lucky. Now if you want to take a pornographic selfie, you just whip out your phone, capture the moment, and go on with your life. Forty million years ago, you had to say “Freeze! Look sexy!” and wait for a drop of sap to ooze over you, and then you had to hold the pose for tens of millions of years.

The snow is back. Not much of it, but it was mixed with freezing rain and now everything is covered with a thin glaze of extraordinarily slippery ice, so I guess Nature is enforcing the stay-at-home order.

These scofflaw birds don’t care at all, though. My yard was covered with sparrows for a while, and the birdfeeder in my front yard has become the most popular meeting spot in the area. KEEP YOUR DISTANCE. STAY INDOORS. Stupid birds. 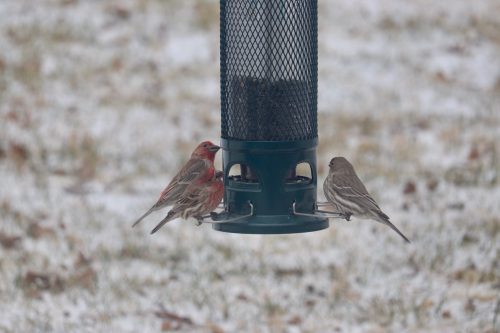 I still dream about cephalopods, even if the arachnids are snaring most of my attention.

I took Iliana on a little survey trip around her house, and was mildly disappointed. She lives in this housing development of too-big houses that have some kind of disturbing style of permitted paint jobs — absolutely everything is in muted earth tones. Dull browns, grays, an occasional dark brick color, but nothing bright at all. The wildlife around here is the same. We spotted a prairie dog colony that yip-yip-yipped at us. 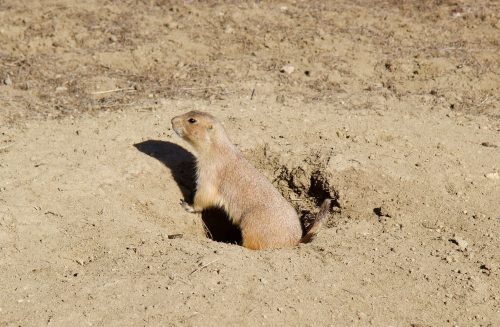 Brown everywhere. Then I found a fly on Iliana’s house, and was amazed: this is the color template for all the houses around here! The developers must have seen these little flies buzzing around and decided to paint everything to match. 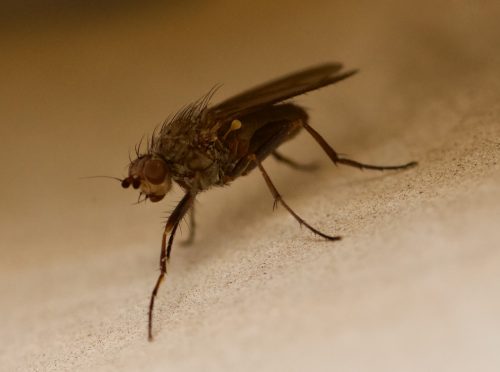 There were no spiders in sight. Finding spider food gives me hope, though.