Robert Garcia, a newly-elected Democratic representative, has chosen the book upon which he will swear the oath of office, and it is not a Bible.

Like any other lawmaker, Rep.-elect Robert Garcia will swear his oath of office on a foundational text. He chose the US Constitution over the Bible or another religious book, and when the time comes, he’ll also take his oath with three sentimental items, including the first edition comic of Superman.

“I’ve read almost all genres, but Superman is always the character that stood out and spoke to me the most,” Garcia, a Democrat from California, told BuzzFeed News on Wednesday.

Reporters on Tuesday spotted the vintage comic book among the items laid out in the House of Representatives in preparation of the swearing-in of newly elected members. In a tweet, Garcia, who describes himself as a comic book nerd in his Twitter bio, acknowledged it was for him. He said he will be sworn in to Congress with the Constitution as well as a photograph of his parents, who both died during the pandemic; his naturalization paperwork from when he became a US citizen; and the first edition of Superman, which he borrowed from the Library of Congress.

I’m happy to see that someone chose something wholesome, rather than that archaic book of misogyny, racism, and violence. Immigrants have to stick together, too. 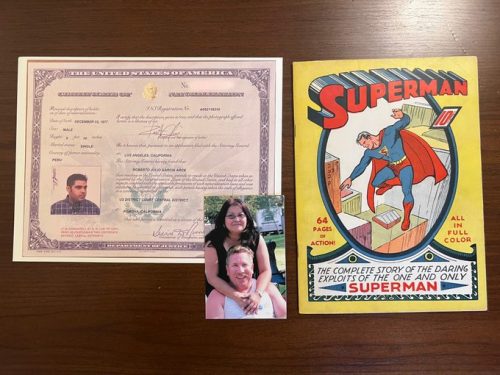 Nothing will ever be done » « I am prepared!