I have been contacted by a loon who is offering big money to anyone who can disprove his mathematical argument that god exists. I’m not interested — it’s incredibly stupid — but hey, if you want to waste your time playing a rigged game, help yourself.

One hundred thousand dollars, $200,000.00, cold hard cash for disproving this theory by these rules.

‘The Theory of Biblical Patterns’ shows the significance of God’s prime digits, ‘3’ for trinity, ‘7’ for divine perfection and God’s prime pairs, 3 and 7 side by side, ’37’, and ’73’ and ’23’ the number of chromosomes in human DNA. All probabilities are shown. The first 28 are from Dr. Ivan Panin 130 years ago and have never been disproven. A half a dozen others are from various sources such as Dr. Chuck Missler. The remainder God gave me directly.

It’s numerology. It’s utterly absurd. Here’s one of his 100 proofs. 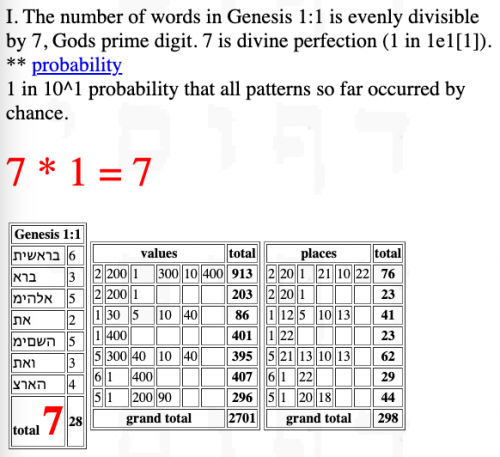 So the number of words in Genesis 1:1 is evenly divisible by 7. Big whoop. What am I supposed to disprove? That a multiple of 7 is not divisible by 7? Or that this mathematically trivial fact is not evidence of god? I suspect he has the former as his trump card, that no one will disprove a truism, so he’ll never have to cough up his cash.

This fruitloop was our president? » « Fox News is mad at a Minnesota teacher