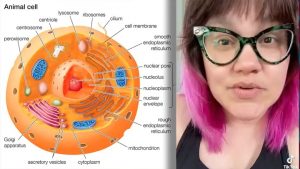 And it’s not me! They’re upset because a St Paul science teacher is a socialist, and not shy about it.

Mandi Jung, a teacher at Highland Park Middle School, said, “Lately, there’s been a lot of conversation about teachers indoctrinating students to their beliefs. And I always find this funny because our children are seeped in capitalist indoctrination from like the second they’re born, basically.”

Jung proceeded to provide the “perfect example” of how “capitalist indoctrination” is expressed in her seventh grade science classes.

“Seventh grade science… [is] the year that you learn that the mitochondria is the powerhouse of the cell and all this cell biology. So at the end of the unit, I have [students] take a test. And one of the questions is ‘A person says the nucleus is the most important organelle in the cell. Do you agree or disagree, and why?”

“And almost every child says, ‘Yes, I agree. Because without a boss, the cell would be in total chaos.’”

Jung added the students’ responses “cracks me up,” and went on to claim microscopic bacteria were the “original anarchists.”

“Bacteria don’t have a nucleus, and they are arguably one of the most successful classes of organisms on the planet. Bacteria out here being the original anarchists, right? No nucleus, no master. Seize the means of metabolism. I don’t know. It’s funny to me,” she said.

She’s right again! I’d also mention our erythrocytes, which lack a nucleus and seem to function just fine. It’s a good point she’s making, that all the organelles in a cell are functioning cooperatively, without any one running the show.

Fox News makes her point for her, and finds it outrageous that anyone would have an anti-capitalist opinion, and went running to the administration to tattle on her.

Fox News Digital asked the Saint Paul Public Schools district whether Jung’s commentary is part of its curriculum, and they sent over a science unit used in the district. The district did not directly answer the question.

For example, she shared on Twitter, “You are not a capitalist, you are an exploited worker with Stockholm syndrome.”

The sentence in the middle is revealing: she says these things on “her social media platforms.” She is allowed to hold her own opinions, you know, and she was making a valid point with her test question, even if the anti-science twits at Fox don’t understand it.

She’s been in trouble with Fox before. She dared to hand out a survey in class asking their preferred pronouns.

The questions asked students about their preferred pronouns and names, and whether those can be used when speaking directly with a student’s parents.

Some of the questions included:

Are you horrified yet? Of course, Fox News went screeching to the authorities. They got rebuffed.

Fox News Digital reached out to the district for comment, and a spokesperson referred to existing policy which said, “Respect all students’ gender identity and gender expression by honoring the right of students to be identified and addressed by their preferred name and pronoun.”

They go on to complain that she asked these questions of students without telling their parents. They’re keeping the parents “in the dark”! I guess students aren’t allowed to have autonomy, or question capitalist hegemony, or even consider the fact that there are forces that want to keep students in the dark.

I also wish to report Mandi Jung to the St Paul school district…for a commendation. We need more teachers like that.