It isn’t mine or yours, it’s only Harvard, as far as the New York Times is concerned. Read this thread to see what I mean.

It’s depressing. I’ve talked to so many people who consider Harvard the sine qua non of academia, when I’ve never been particularly impressed with the institution. Not that it’s bad, but this country, and other countries, have so many worthy universities that contribute far more to science and other disciplines…but the NYT, and other media, have created this myth of the superiority of one over-priced private whose primary, notable qualification is that rich people go there. See how skewed the headlines are: 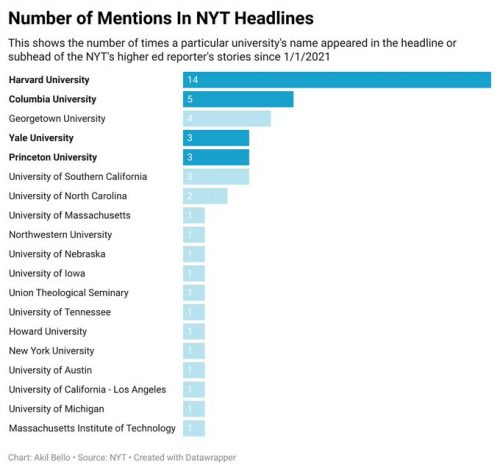 This is a vivid illustration of the problem:

To put a spin on an image I acquired from @James_S_Murphy pic.twitter.com/dpmc9QYJ05

(If you’re not up on the lingo, “HSI” is a Hispanic Serving Institution, “MSI” is Minority Serving Institution, and “HBCU” is a Historically Black College or University. I’m at a public and primarily regional college. Not that NYT readers would get exposed to any of that riff-raff. Really, unsubscribe from the New York Times, don’t bother reading it, it’s a bastion of all the inequity and elitism that is wrong with the US.)

Infinite Thread XXIV » « We have these people in Minnesota, too