This is rather interesting: an article from the National Museum of Ireland describing the appearance of the noble false widow (Steatoda nobilis) in that country, in the late 1990s. I haven’t seen any of that specific species in my neighborhood, but apparently they are a significantly invasive species. We have lots of Steatoda and Parasteatoda here, though!

Most of us in Ireland have heard about this recent arrival, but few would know its scientific name, Steatoda nobilis. This spider is more commonly known as the noble false widow.

Interestingly, in an article published at the time (Nolan 1999), Myles Nolan tells the reader that a couple of weeks prior to the aforementioned Bray discovery, another person had found a great number of these spiders on their own property, approximately 250m away from the Bray residence. The author observed at the time that these spiders have a high reproductive rate, and that the spiderlings are inclined to disperse widely from the egg sac, perhaps accounting for this species’ ability to colonise easily.

The Museum specimen detailed in our acquisition register is, however, the first valid Irish record as an identified specimen was lodged with the Museum. That specimen (called a ‘voucher specimen’) is now stored safely in the Museum and is available for study and research.

As Ireland currently houses relatively few animals who pose a risk to human health, this new arachnid is now of great curiosity to the public. The reports, however, are over emphasised, and there is little for humans to fear from the noble false widow.

A recent report from the Irish scientific community however, showed that a common lizard had been preyed upon by this diminutive spider (Dunbar et al. 2018). The young lizard was discovered wrapped in spider webbing, with the noble false widow crouched over its head, presumed to have been feeding on it – a potential worry for Ireland’s only native terrestrial reptile.
The noble false widow can now be found in at least 17 Irish counties, all year round, both indoors and out (although more so the latter). They have a strong tendency to live on manmade structures and materials, such as steel, concrete and timber. Sheds, outhouses and boundary railings provide the perfect habitat for our new arrival.

Part of the reason for the relatively sudden appearance of Steatoda nobilis in the scientific eye, though, is the British tabloids, which had an absolute freakout over big spiders, playing up the nearly non-existent dangers and clutching their pearls over the observation of a few spiders near one of the Queen’s estates. It was ridiculous. 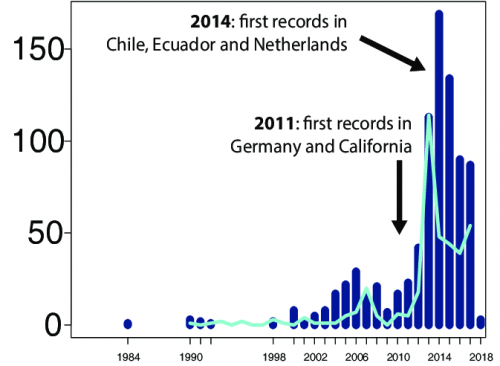 Increase in Spider Recording Scheme records for Steatoda nobilis in Britain parallels intensified
press coverage in the local newspapers (dark blue bars = spider records, light blue line = number of press
articles). The sudden massive increase in records seen in the last decade coincides with the first appearance
of the species in various other countries far from the native range in the Macaronesian islands.

I can vouch for Steatoda‘s eagerness to disperse — when I found the newly emerged clutch of spiderlings yesterday evening, they had nicely spread out equidistant from each other in their container, and when I opened it up, the race was on, with all the spiderlings on the edge of the mass rushing to get out into the larger lab. I think they don’t much care for their brothers and sisters.

The “high reproductive rate”, though, is a relative thing. My impression of Steatoda triangulosa and Steatoda borealis, the local species in the genus, is that they were sluggards compared to Parasteatoda. They take a month to develop from egg to spiderling, compared to Parasteatoda‘s week and a half, and they have much smaller clutch sizes than Parasteatoda. I’ve been sitting here feeling like the Steatodas take forever to get to the point I can work with them.

On the other hand, at the end of that month I am finding myself drowning in baby spiders…

Creationists deny science, don’t let them get away with saying otherwise » « Back from our adventure