Randy Milholland, creator of the webcomic Something Positive, has busted into the big leagues and is now responsible for the Sunday Popeye strips. He’s doing a fine job!

I hates debate trolls, too! He’s also refreshing a few things about the strip.

After nearly a hundred years in existence, the Popeye comic strip is reportedly getting a woke makeover, with the strip’s latest cartoonist promising more ethnic diversity and “more characters who aren’t heterosexual.”

Cartoonist Randal K. Milholland described the Popeye character as being “gender fluid,” citing old episodes in which the plot required Popeye to dress in drag.

“I [want] to bring in more characters who aren’t heterosexual,” Milholland said in an interview with the San Antonio Express-News. “I don’t live in that purely straight white world, and I don’t think a lot of other people do either.”

Good news, I would think. Unfortunately, that quote is from Breitbart, where talking about “a woke makeover” is like waving a strip of red meat at a very stupid and confused bull who has forgotten what a normal diet is and thinks an all-meat meal is exactly what real bulls eat. The comments section is bizarre — the idea that a comic strip might include non-straight characters enrages them. 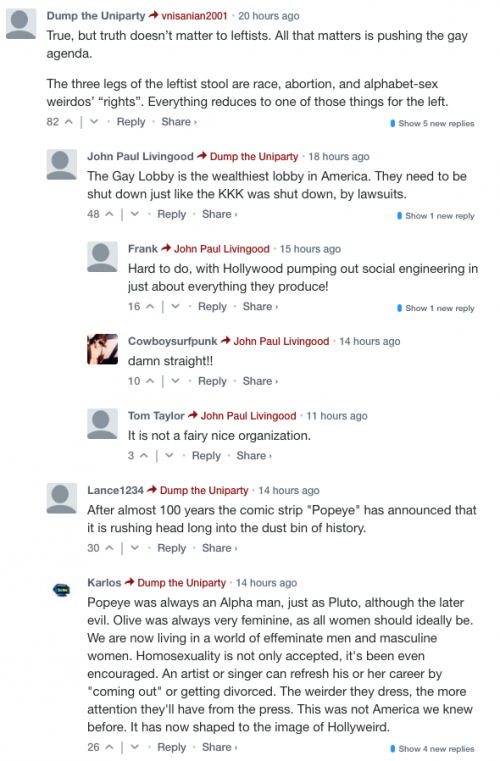 It’s got 600 comments and they’re all as detached from reality as that sample! Did you know that having a gay character in a comic strip represents the Neo-Maoist erasure of history and destruction of culture? They also kind of lose the plot somewhere in there and start ranting about black characters in comic books, all while periodically quoting the Bible. I don’t think any of them are very tightly moored to reality.

Did anyone bring a hook? Get him off the stage. » « Congratulations to the UK