Oh man, I got lost fast in this discussion. Anyway, there was an old Sumerian joke going around the interwebs a short while ago. It was totally incomprehensible. 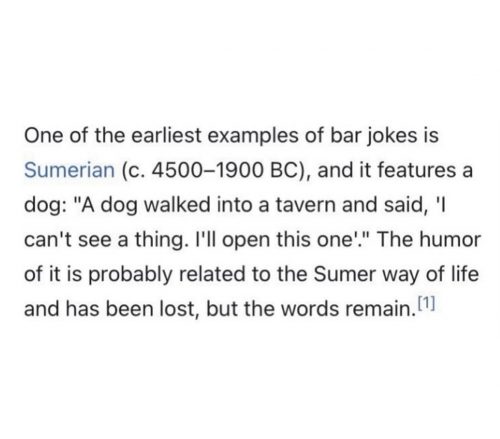 Someone who is apparently an expert in Sumerian (I assume, I have no idea, they could be a highly skilled bullshitter) took the original text apart in an extremely detailed fashion on Twitter. I’ll just have to trust them. Follow the thread if you want to see the train of logic and obscure Sumerian grammatical rules. But they do come to a conclusion, an interpretation of the joke that actually makes sense.

And now we can finally explain the joke:

A friendly dog walks into a bar.
His eyes do not see anything.
He should open them.

I think it might be the oldest known Dad Joke.

Lara Logan: A classic example of not even wrong » « Sooooon