Once again, the Minneapolis police flaunt their fascist behavior once again. Using a no-knock warrant, they burst into a person’s apartment in the early hours of the morning, and 9 seconds later, when a man stirs under his blanket and reveals that he has a gun, bang-bang-bang they shoot him dead. His name was Amir Locke. He was not named in the warrant. He was not associated with any criminal investigation. Maybe it was stupid to be sleeping with a gun, but the body-cam video shows a sleeping man abruptly awakened and disoriented, and killed within seconds. I guess that’s what a no-knock warrant is, permission to barge into someone’s home and murder the occupants.

The police statement is amazing.

An officer fired his duty weapon and the adult male suspect was struck. Officers immediately provided emergency aid and carried the suspect down to the lobby to meet paramedics, the report states. The suspect was transported to Hennepin County Medical Center where he died.

Huffman tried to explain the police tactics used during the raid, stating that the footage shows the barrel of the gun from under the blanket forced the officers to make a split-second decision.

The chief also admitted that Locke was not named on the warrant the officers were executing—and said it was not immediately clear whether he had any connection to the original St. Paul homicide investigation that prompted the raid.

Boy, the passive voice is doing a lot of heavy lifting there. “An officer shot a man, killing him” would be a lot shorter and cleaner. They call him a suspect to make it sound like he was suspiciously bad, when he wasn’t a suspect in anything at all, just a guy sleeping. It wasn’t the officer’s fault, he saw a gun and was forced to kill him. Those good Samaritan officers then provided emergency aid — how kind of them — to deal with the two bullet holes they had just blown in Locke’s chest.

There is, of course, no expression of remorse, no recognition that maybe they’d been a teeny-tiny bit overzealous and trigger-happy, and that, just maybe, they’d fucked up big time, again. 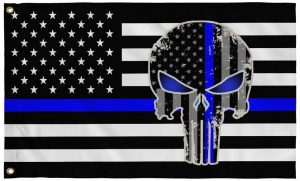 You can actually buy this flag for $11.66 at Amazon. America!

Well, now they’re in trouble. They have just criminalized owning a gun in your own home, a crime that earns an instant death penalty. I’m sure all the white Republican gun nuts are going to march on Minneapolis en masse to protest this abrogation of their constitutional rights. At the very least they’ll be tearing down their thin blue line flags, and politely discussing reforming police policy. Right?

Never mind, they’re frantically searching police records right now to find out if he had a parking ticket in 2015, in order to justify the murder.

Friday Cute Cephalopod » « How to knock out a spider