I noticed that Kent Hovind wasn’t posting any videos on YouTube lately — apparently, he’s been banned, for how long I don’t know, but it’s about time. If you’re going to police misinformation on your social media site, Hovind is one of the worst offenders.

Unfortunately, these bannings are just for show and have no teeth to them. For a while, he was getting his videos hosted by Matt Powell (if you don’t know who he is, consider yourself lucky — he’s a young Hovind wanna-be), but now Hovind has created a whole new channel and resumed his cartoonish, ignorant ways. The good news: he has plummeted from having a channel with 190 thousand subscribers and each video getting tens of thousands of views to one where he has fewer than 200 subscribers and his videos get a few hundred views. He’s down in my territory now! Although I suspect he will grow fast as he is rediscovered, at least until he gets banned again.

He’s still doing his whack-an-atheist schtick, to a much smaller audience, though. His latest target is Emma Thorne, and you will notice…I do link to her. Notice also that he’s still condescendingly stupid, he’s still reciting the same tired cliches (“you believe you came from an amoeba!”), and he’s still totally wrong (no, we didn’t descend from a complex, specialized protist like an amoeba). You don’t need to watch any new Hovind, or Powell, videos — he’s still parroting the same tired lies and jokes he was doing thirty years ago, and he hasn’t learned a thing. 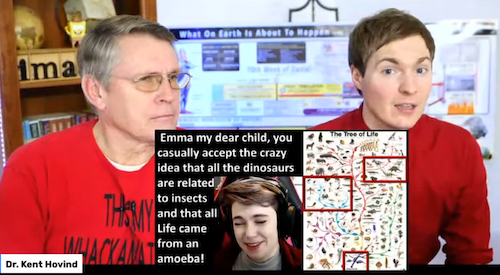