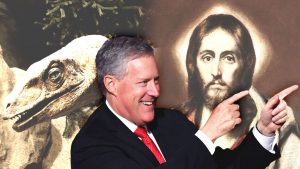 Mark Meadows may go down in history as the corrupt political sleazemaster who assisted Trump in his coup attempt (which is still ongoing, unbelievably!), but I remember him as that loon who bought a dinosaur dig site, facilitated the transfer of a valuable Allosaurus skeleton (naming it Ebenezer) to Ken Ham and the Creation “Museum”, and put together a “documentary” about the discovery of the fossil in which he had his own daughter lie on camera and pretend to be the discoverer. It’s pretty damned vile, and just highlights how dishonest and creepy creationists are.

But here’s the icing on the cake: Ken Ham appropriated that fossil and mounted it in his carnival show “museum”, where it’s not even used for scientific research. It’s a prop.

But for all of this, the weirdest part of the story may be that – for all the desperate efforts on the part of creationists to secure this dinosaur skeleton, for all the brouhaha and AiG-hype surrounding “Ebenezer the Allosaurus” – the Creation Museum makes absolutely no use of the skeleton itself to advance the case for a young Earth and a global Flood. Referring to arguably the most relevant placard that accompanies the dinosaur fossil, we note in Righting America that

The only evidence provided by the Creation Museum in behalf of the claim that Ebenezer died in a global Flood is the story recounted in Genesis 7:21-23. That’s it.

When it comes to creation science, there is no there, there.

Now Meadows has something else to be infamous for.

The House voted Tuesday night to hold former President Donald Trump’s chief of staff, Mark Meadows, in contempt of Congress for defying a subpoena from the House select committee investigating the Jan. 6 Capitol attack to appear for a deposition.

The vote was 222-208, with GOP Reps. Adam Kinzinger of Illinois and Liz Cheney of Wyoming voting with all Democrats.

What a legacy. These are the charlatans the American people elect to high office.

Hovind gets banned! Hovind rises from the dead! Hovind is still a mindless zombie. » « We weathered that weather just fine