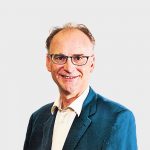 Matt Ridley is definitely a smart guy, and he also writes well. I enjoyed some of his earlier books, like The Red Queen and Genome, but I became less appreciative as he became more openly libertarian, and espoused a Whiggish view of the world that was only a rationalization for why he was so wealthy and privileged (he’s kind of the British version of Pinker, only worse). He’s the 5th Viscount Ridley, don’t you know, he is to the manor born (Blagdon Hall, Northumberland, specifically), he’s a member of the House of Lords, he endorsed Brexit, he owns coal mines, he used to own a bank, but he ran it into the ground and it was taken away from him and nationalized. On climate change, he’s argued that global warming is going to be a net benefit, increasing rainfall and the growing season, and that human ingenuity will overcome any minor disruptions. He even coauthored a book with Anthony Watts and Bjorn Lomborg and a host of the usual denialist suspects, Climate Change: The Facts 2017, which ought to alarm anyone who wants to think he’s just being objective. I guess that comes of owning coal mines and being an enthusiastic endorser of fracking — when your prosperity is a product of spewing as much fossil carbon into the atmosphere as you can, your very smart brain will work very hard to find excuses.

That doesn’t explain why he’s become such a dedicated proponent of the lab leak “theory” for the origin of COVID-19, though. He’s not an epidemiologist, and it shows, but now he’s authored a book, with a post-doc, Alina Chen, titled Viral: The Search for the Origin of COVID-19. Unfortunately for him, it has been dissected by the formidable Lindsay Beyerstein.

The lab leak theory, for the uninitiated, is the notion that the Covid-19 virus that has now devastated the globe is not of purely natural origin but rather escaped from a lab after it was harvested from the wild or engineered by Chinese scientists. It’s not actually a single theory but, rather, a grab bag of possible scenarios by which the virus might have been unleashed on the world—all of them implying some level of shady or incompetent behavior by Chinese scientists. And in trying to take each of these scenarios seriously, Viral’s authors have unintentionally exposed the entire farce of the lab leak discourse—showing both the exceptional flimsiness of the lab leakers’ narrative and also why this very flimsiness makes the lab leak conspiracy theory so hard to eradicate. By relying on an ever-growing arsenal of seemingly suspicious facts, each pointing in a slightly different direction, lab leaker discourse renders itself completely unfalsifiable.

Like I said, Matt Ridley is a smart guy, and he knows he can’t take a strong stance on any idea, whether it’s climate change (he calls himself a “lukewarmer”) or this lab leak nonsense, where he practices a performative neutrality. It’s his evasiveness that reveals his biases — he tries so hard to dodge around his beliefs that the shape of them is recognizable.

The book is structured around a set of themes, which I hesitate to call arguments because the authors decline to argue for anything in particular. (In this sense, the book aligns perfectly with what academics have been saying about conspiracy theories for years: that the theories rely on people poking holes in the official narrative without committing to a single plausible alternative.) First, the authors attach great importance to a mysterious pneumonia outbreak linked to the abandoned Tongguan mineshaft in Mojiang, China, in April 2012, which lab leak theory adherents see as a critical episode in the history of Covid-19, because researchers with the Wuhan Institute of Virology later found the bat virus RaTG13 in that same cave, and RaTG13 was briefly the closest-known wild relative of the SARS-CoV-2 virus that causes Covid-19. Second, the authors focus on the purported evidence of “preadaptation” of Covid-19 to human hosts. Finally, they examine gaps in the epidemiological record that purportedly call into question the current scientific consensus that the pandemic began in the Huanan Seafood Wholesale Market in Wuhan, following a “spillover” event in which the virus passed from a live animal to a human.

That’s a good tell for recognizing that you’re dealing with a conspiracy theorist — they spend all their time trying to find errors or inconsistencies in good theories, which they can use to claim their unsupported, extremely wobbly, speculative alternative must be the correct answer, an illogic that they never quite grasp. Sound familiar? That’s because it’s exactly what creationists have been doing for decades. Intelligent design creationism, in particular, relies on Ridley’s strategy. They’re not about to give you positive evidence for what they’re claiming, they trust that finding gaps or even errors in modern biology will give their supporters sufficient excuse to lapse into what they’re biases predispose them to believe.

Ridley’s mistake here is that he gave away enough of his own beliefs that holes are being poked in them in turn. There is a heck of a lot of work being done on bat viruses now, which Ridley has no competence to address.

A series of recent discoveries, however, has undermined Viral’s central themes: Newly discovered wild bat viruses from Laos have proven not only more genetically similar to the Covid-19 virus than any previously known to science, including the Wuhan Institute of Virology’s RaTG13 sequence, but also directly infectious to humans via the same mechanisms that the Covid-19 virus uses to infect human cells. These findings make Viral’s breathless speculation about the Mojiang mine and the origins of RaTG13 completely obsolete. This discovery also suggests that whatever “preadaptation” was needed to make Covid-19 infectious to humans could have happened in the wild over many years of natural selection. The Laos bat preprint was published in mid-September, by which time it may have been too late to address it in the book.

Meanwhile, a reanalysis of early Covid cases published in November in the journal Science has confirmed the Huanan Seafood Wholesale Market as the likely site of a zoonotic spillover event. Another paper, which gets a brief discussion in the book, established beyond a reasonable doubt that, contrary to Chinese government denials, live wild-caught animals that could be prime viral vectors were illegally sold at the Huanan market through November 2019—including raccoon dogs, hog badgers, and Siberian weasels, all members of the carnivorous mustelid family, which is known to be susceptible to SARS-like coronaviruses.

Every time Ridley opens his mouth on the pandemic he exposes his own ignorance. Back in the fall of 2020, Ridley was arguing against basic health measures.

It is counterintuitive but the current spread of Covid may on balance be the least worst thing that could happen now. In the absence of a vaccine, and with no real prospect of eradicating the disease, the virus spreading among younger people, mostly without hitting the vulnerable, is creating immunity that will eventually slow the epidemic. The second wave is real, but it is not like the first. It would be a mistake to tackle it with compulsory lockdowns (even if called ‘circuit breakers’), whether national or local. The cure would be worse than the disease.

If you cannot extinguish an epidemic at the start, the best strategy is for the healthy to get infected first. Lockdowns ensure that the vulnerable and the healthy both get infected with similar probability.

The alternative to lockdown is not ‘letting the virus rip’, as Boris Johnson puts it. The Great Barrington Declaration, signed by over 20,000 doctors and medical scientists (but disgracefully censored by Google’s search engine), calls for focused protection: help the elderly and vulnerable stay at home, but let the young and invulnerable go out and achieve immunity for us all, while earning a living. The extraordinary truth is that a student catching Covid might be saving Granny’s life rather than threatening it.

In support of that claim, he cites the example of Sweden, which refused to enforce any lockdowns. With the benefit of hindsight, we can see what a mistake that was: Sweden has had more cases and deaths than neighboring Scandinavian countries.

Ridley doesn’t have to worry, though. He still has plenty of high profile supporters.

That man just keeps embarrassing himself. I wish he’d stop.

At least they made him cry » « My granddaughter, trendsetter & influencer