But it’s almost Hallowe’en, so I get to revel in spiders for a while.

Below the fold is a photo of what looks like a gigantic spider filling a room, surrounded by a swarm of its babies.

The good news for you arachnophobes is that it’s a trick of perspective — it’s actually photographed in a smaller enclosed space.

The bad news is that the space was under the photographer’s bed.

The badder news is that it is a Brazilian wandering spider, one of the most venomous spiders known.

Also, the photo was posted on The Weather Channel’s page. You never know what you might see when you go to check the weather for a picnic. 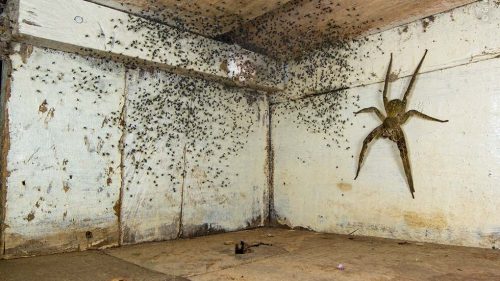 Oooh! Oooh! Here’s the photographer’s page, and he includes several closeup photos of that beauty. He writes:

While I was very happy to find this spider, I was a bit reluctant to sleep above one of the world’s most venomous spiders. I had a series of unfortunate events lately, and I did not want to add that kind of story to my résumé. I debated whether I should take the adult spider out of the room. I did not like the thought of separating the mother from her babies, but spiderlings are known to be independent right after their first molt, and most of them end up being cannibalized by their siblings anyway. In addition, there are several reports stating that Phoneutria females guarding an egg sac are a bit more toxic than females without egg sacs. For these reasons I decided to gently direct the spider into a container without aggravating it, and then release it into the rainforest.

Surprisingly, the spider was not aggressive during this short transfer. In fact, it was one of the most docile spiders I have seen. It is possible that it was relaxed from feeding, though. When I took a step back, the spider immediately erected its body and lifted its front legs, revealing beautiful aposematic coloration on its underside. It stayed like this for some time, allowing me to get a little closer and to experiment with photography. I started to get used to its behavior and got closer with my camera until I almost touched the spider with the front element of the lens. It seemed that the spider couldn’t care less for this. Then it scared me to death when it decided to climb on the lens.

I empathize. I would be ecstatic if I found one of those under my bed.

Transphobes occasionally dip a toe in here » « Friday Cephalopod: What’s nightmarish about this?